Ao Hibiki made her debut as an idol and a lyric composer from Avex on August 23rd this year. Mizuki Kawamo, who is still in the second year of new graduate, is in charge of this artist. In addition to her unique experience with a real user viewpoint, Kawamo suddenly took charge of the job duty that required experiences such as publicity and A&R. We also pay attention to the existence value of "Special Project Unit" in the Label Business Division. 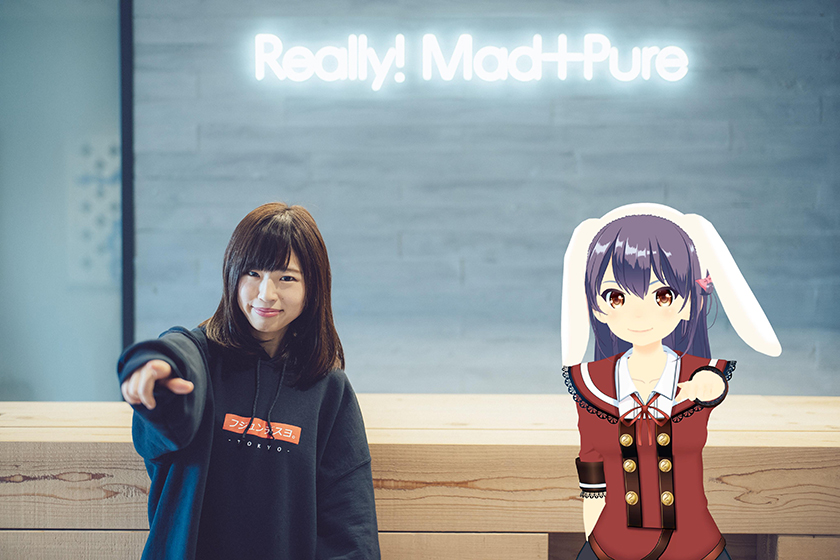 Three-dimensional idol,
possibility to what can not be done
with animation Ao Hibiki,
who was found by the sense of
the second year of new graduate 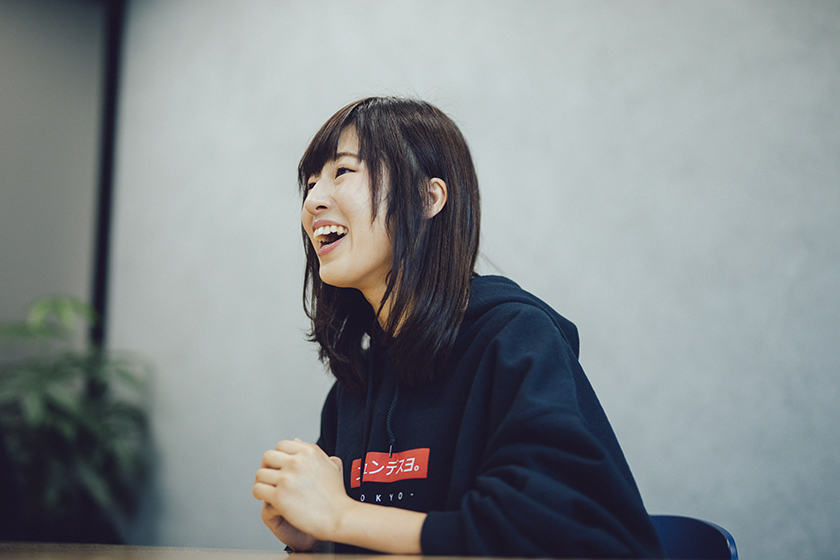 Kawamo is currently involved in the creation of artists in the Asian market, with Ao Hibiki as a leading artist, in a Special Project Unit in the Avex Entertainment label business headquarters. The origin of her hope to make greater sales of Ao Hibiki with Avex was her view as a real user.

"I was interested in the VTuber scene as well as the various characters themselves. That was March to April of this year. Ao Hibiki's live was held in my neighborhood, so I went to see it. Looking at the enthusiastic fan there, I felt that 'Oh, this can be expanded to a greater extent.' In addition, I felt the charm of Ao which she was a singer-songwriter in a sense, who sings and writes songs of her own feelings. "

Kawamo herself has entered the second year of joining the company, going one step further from studying and business support. And it was overlapping with the time when she was searching for what she wanted to do. She said that it linked with a feeling that she wanted to be in main charge of some artist. So she gave a presentation to her boss about a fabulousness of an idol called Ao Hibiki.

"I knew that we were emphasizing entertainment × tech as a company, so I strongly promoted that. But first I wanted him to listen to her songs. Of course, as there was an image like 'two-dimensional!' at first sight, I made him listen to "Denshi no Symphony (Symphony of the Electron)" that sang herself living in the electronic, and used her other songs for the presentation as well. Of course, I also included the possibility of being able to do things that three-dimensional real idols or animation couldn't have done, and the point that 'we can take profits of both.'"

Change backbone to energy
for growth strategy With
360 ° business, virtual idols
will go beyond dimension 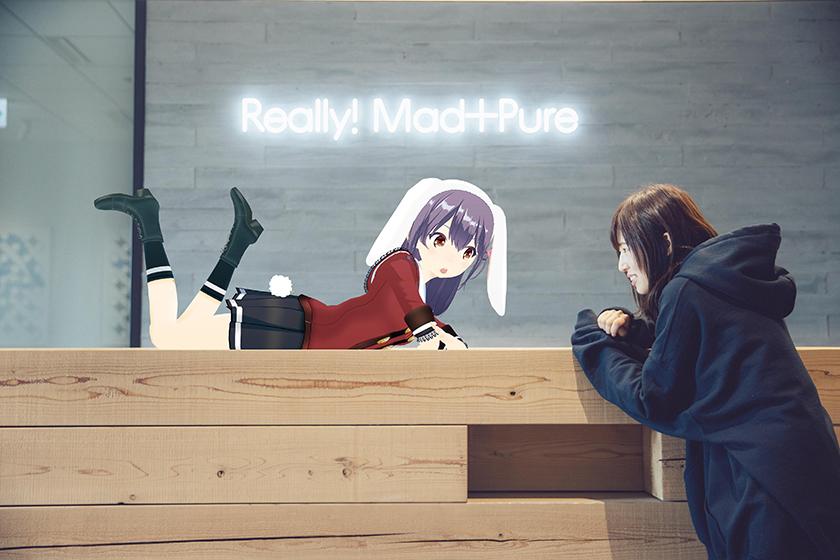 The backbone of Kawamo's own hobby's taste and the future vision from the school days also influences the background to be in charge of virtual idols.

"There were three keywords in motivation for me applying for Avex. Since I was a student, I was really an idol otaku (geek) as I listened to music only of idols. So I wanted to get involved with idols at work as well. Also, since I was studying abroad in China during college days, Asia was also a key word. Since I was experiencing event creation in college days as well, I came into the company with a shallow idea that if it were Avex, I could be involved with all those three (laugh). "

While saying shallow, Kawamo is steadily realizing her vision because of the “real user = idol otaku” part in herself.

"I think that the fact that everyone has less resistance to virtualism has led to the popularity of the current virtual idols. It is also great that the resistance to the word otaku has disappeared. There are still few girls in Ao's live, but I would like to take measures to raise girls' popularity."

In addition, the fact that she herself also experienced to be a local idol and spread the Japanese “kawaii (cute)” culture at the time of studying abroad in China, seems to be a great help to the growth strategy of Ao Hibiki from now on.

"It was a time when the local idol was excited, so I thought of trying it myself. In addition, I was spreading Japanese kawaii culture in Beijing while studying abroad, but I thought that overseas people wouldn't listen to idol songs even if I recommend only those. So I managed to find events, made them see where idols appeared and danced, and actually made them liked Japanese idols. Now I wonder where that power came from (laugh)."

Kawamo produces Ao Hibiki with the same motivation and energy for living artists. There is the strength of the Special Project Unit (SPU) department.

"The horizontal axis may be one keyword, since SPU is a department that sees various departments side by side. For example, I can see that now this artist is getting hot and such things are troubling here. It may be a feature of the department to be composed of members depending on the project, regardless of internal or external. I would like other companies to use Avex's 360 ° business effectively, and I would like to create various things by multiplication rather than summation. It's also the mission of the department to create new Avex culture together with people outside the company, not just within the company. "

In the meaning of the horizontal axis, they have already provided music and co-starring to Takoyaki Rainbow. Although it's currently a collaboration between in-house artists, there is a possibility of collaboration with outside artists from now on.

"I would rather like Ao to use the 360° merit. 'AOturing (Aocharing)' that I currently put emphasis on is a project called Ao Hibiki featuring Real Idol, and I want to progress it more and more. As it was something I couldn't do very much if I were at the virtual world side, I want to pull it to the world of 3 dimensional more and more. And I want to take advantage of virtual unique benefits such as worldwide simultaneous live while exceeding the dimension in a positive way." 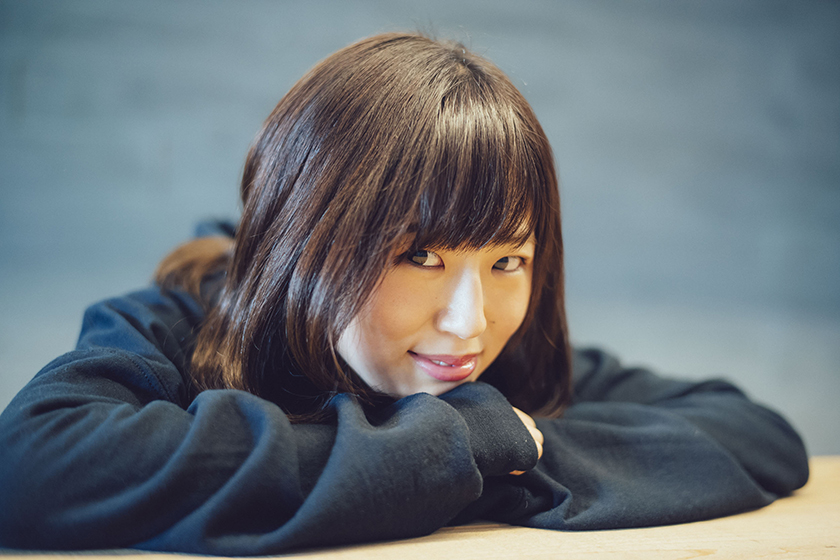 As for Asia Market, she is also considering cultivating artists in China, taking advantage of sense of the period when studying abroad.

"Now, China is an idol boom. It's divided into a so-called Japanese-style idol and a Korean-style idol, but I guess that Japanese-style idol is seeking J-POP-like music, Ao Hibiki as an artist definitely wants to join there as well. I want to go there and give a presentation. Nowadays, as people can listen to songs from any country if they have internet, I want to offer music to overseas artists. I've got more dream (laugh). Speaking of China, we are concentrating on another effort, and I'm participating in a new project that is now using Asia as a market. I hope to become a force for Avex's advance in Asia while making full use of my experiences during my school days."

She seems to talk about her dream frankly, but it goes a bit beyond the real user's point of view. That's why the idea of Kawamo is likely to cause Buzz in reality.

"My boss recently told me that 'It's your advantage just being the second year to join the company.' I have the closest eye line to the users. For example, I am in the middle of the fan group of Ao Hibiki. I just got an advice as 'What you feel is going to be true as it is, so keep it alive."

She says that she works day by day repeating try and error to find out how much it is possible to get into daily lives of users who don't listen to music, multiplying something unrelated to music.

"I'm working with the feeling like the brave of RPG!"

That's exactly the tagline of Avex,"Really! Mad + Pure" itself.

"Oh, and it was in December last year when this tagline was announced. I heard it at the prospective trainee training, so it’s just a natural thing, but I'm a fellow with this word (laugh). So it's in my mind quite always when I think about something."

Next generation entertainment is born from the combination of Avex's 360 ° business and virtual idol, and young employees with real user perspective. The seemingly reckless plan is also nearly realized by technology and next generation's conception that imagines "things that are not in the world today". 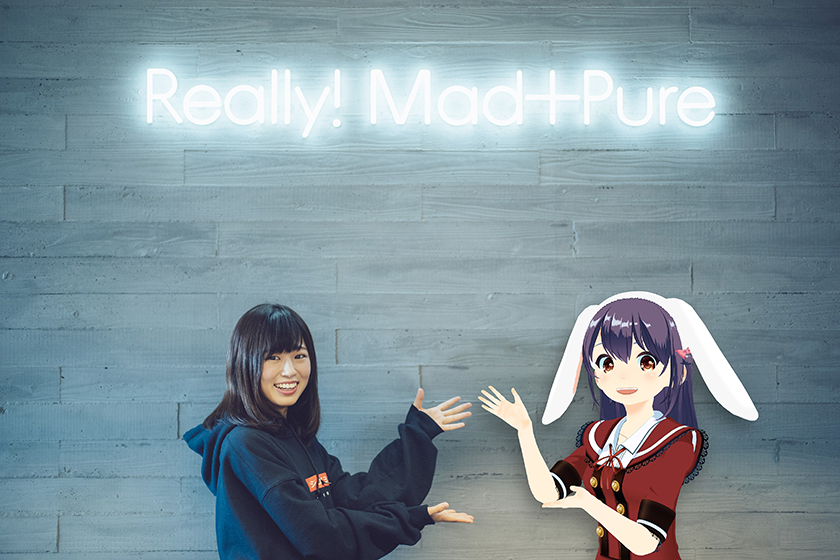