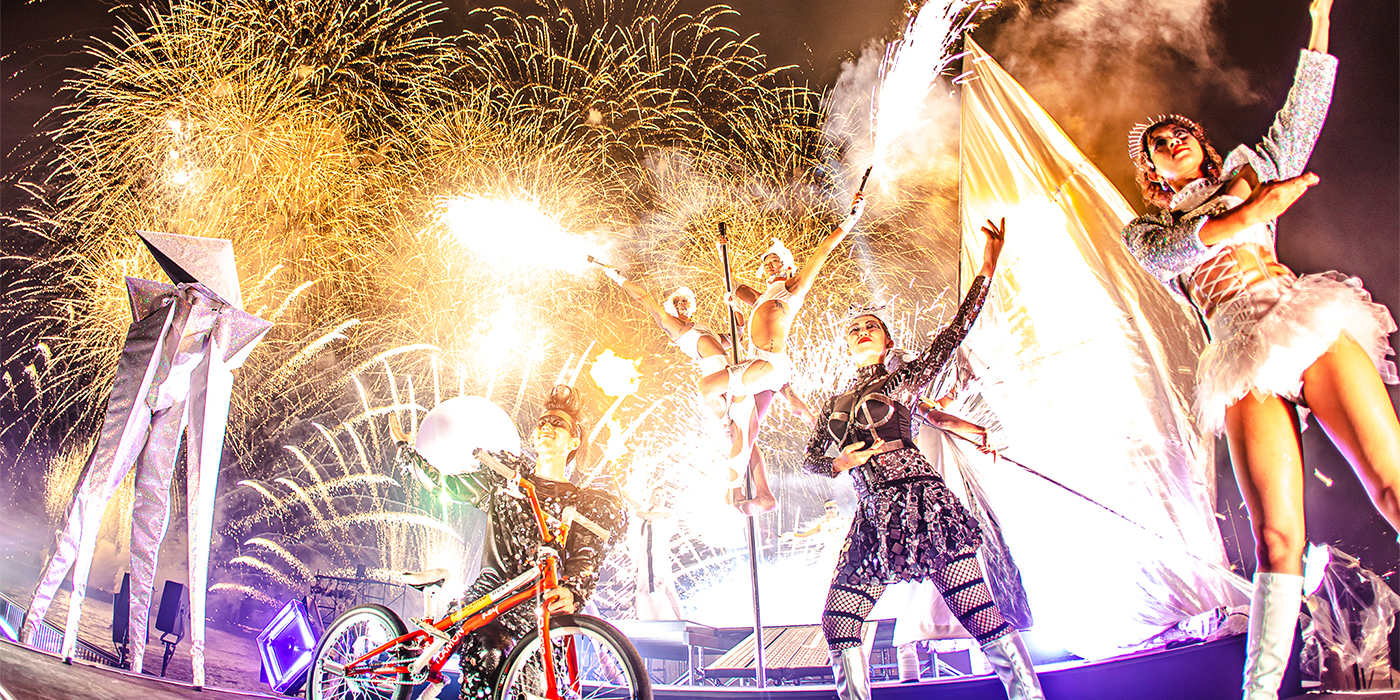 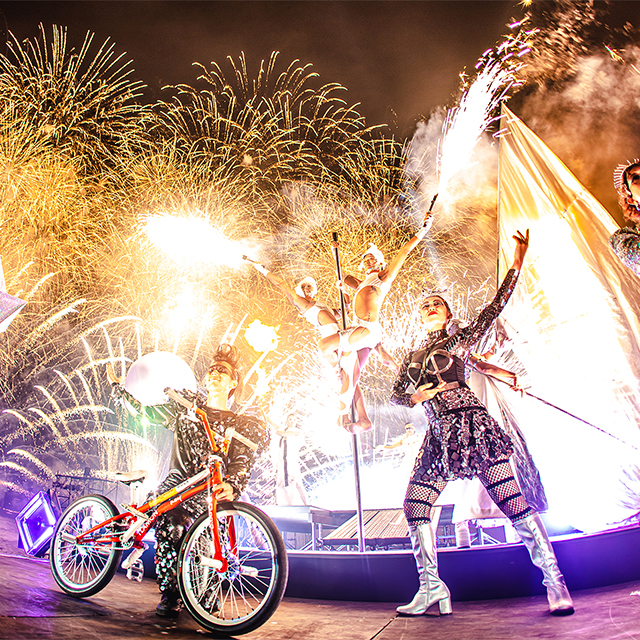 A Speechless Performance
Wows the World. STAR ISLAND 2019:
An Expansion in Senses

TOKYO STAR ISLAND 2019 went off without a hitch on Saturday July 20th 2019, at the Toyosu Gururi Park, Tokyo. Starting in 2017, tickets for the show sold out both previous years. At the end of 2018, STAR ISLAND was also successfully held overseas in Singapore as the main attraction for the Marina Bay Singapore Countdown 2019, one of the largest countdowns in all of Asia. This event also completely sold out. How has the entertainment spectacle evolved for its third time around after mesmerizing 20,000 people in Singapore that gathered from over eighty-six countries? In our second consecutive report of STAR ISLAND we show you what the triumphant homecoming had to offer as “entertainment to expand the senses.” 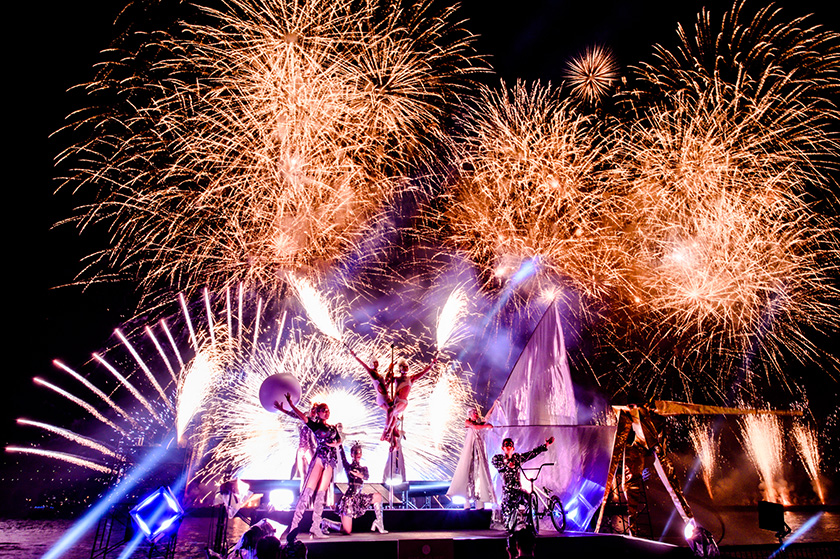 A diversifying audience.
The evolving hospitality witnessed during “Chill Out Time.”

Shigeyoshi Sakamoto from Avex Entertainment commented about the new and improved version.
“We made plans to update many facets of the event this year in hopes of making it more attractive as a location-based event and to completely separate us from the preexisting firework shows. The new and improved location helped make that easy. This was the first time fireworks were held in the Toyosu marine area of Tokyo Bay. The entire show was brought much closer to the audience, from 900 meters to 200. We stepped up hospitality-wise as well, focusing on food and kid areas, and included a more diverse array of entertainment such as gymnastics, BMX and stilt performances. We really tried enhancing our contents for a multifaceted form of entertainment that stimulates all five senses.”

Once visitors stepped through the STAR GATE into the event’s futuristic world, they are greeted by the food and drink area, offering the widest menu yet. Young and stylish families with children, people of all ages, all mingled and relaxed during the pre-show hours. 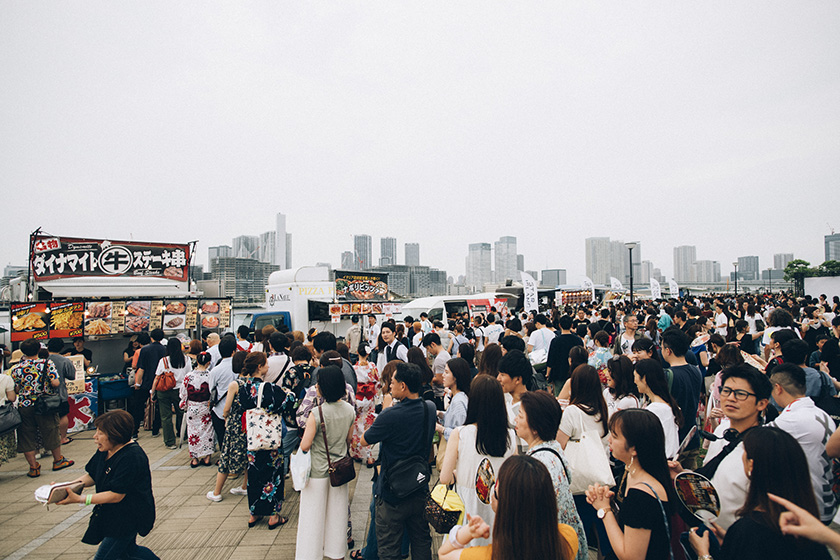 The viewing area was located on the other side of the venue. The types of seating increased in variety, including a LIMITED STAR SEAT –BBQ- for some delicious charcoal fun, the LIMITED STAR SEAT –DINNER- for those looking to enjoy a proper a meal with the show, and LIMITED STAR SEAT –PICNIC- for people in the more relaxing mood. There was a total of eleven different types of seats. Next to the picnic section was two kid areas that included ball pits full of children lost in play. 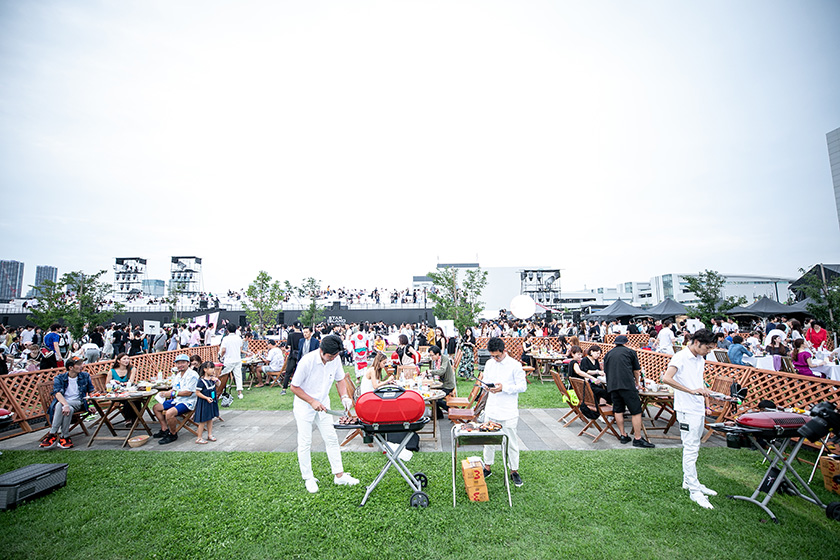 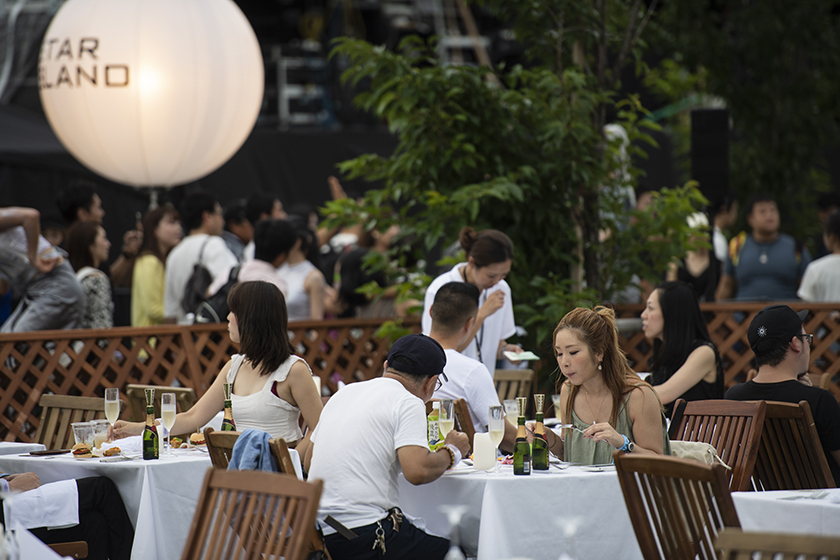 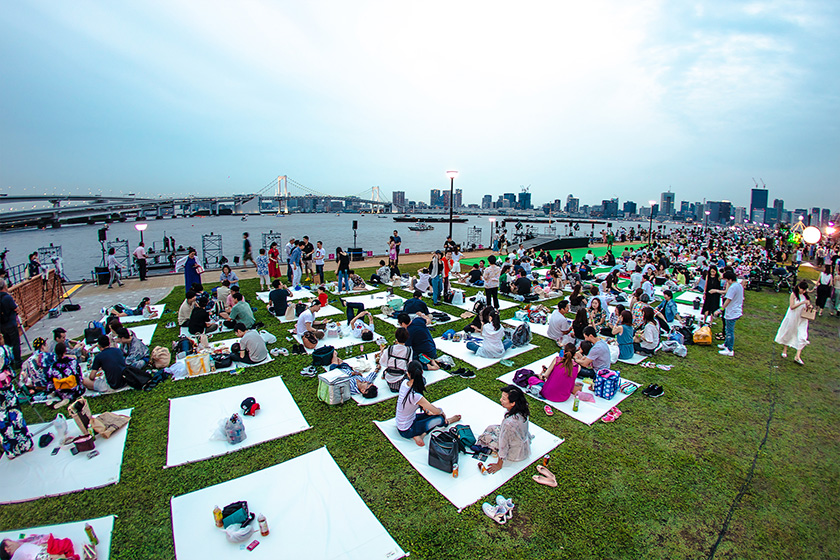 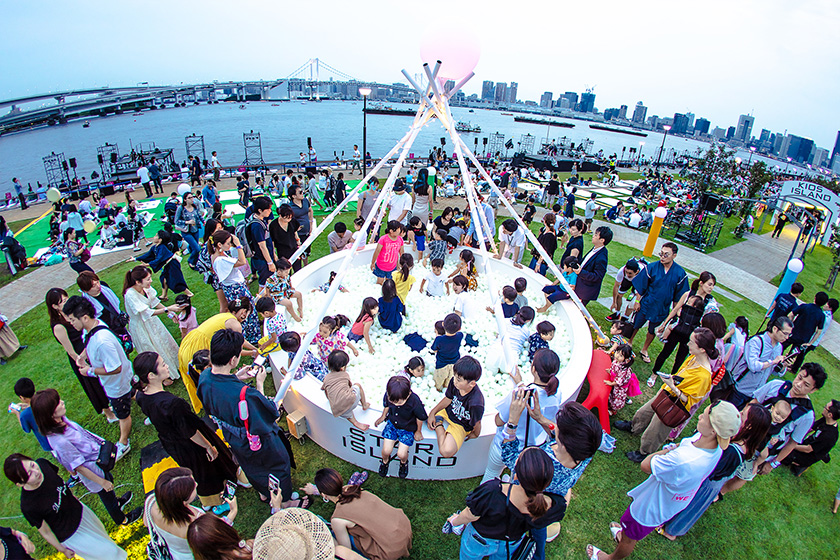 Towards the middle of the grounds were public street-style performances by the company ICHIZA for their second year, which included juggling, wheel gymnastics, people jumping around in stilts and other acrobatic performances. The STAR ISLAND SPECIAL SUNSET ENSEMBLE featuring violin and cello played for the crowd and other popular DJs and artists like Licaxxx, Naoki Serizawa, SHINICHI OSAWA (MONDO GROSSO) kept them alive and on their toes in front of the monument located in the center of the venue. 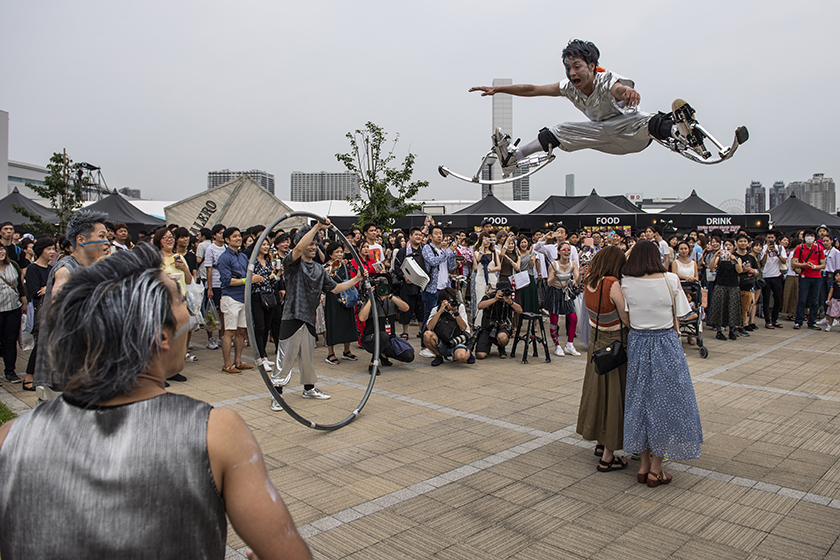 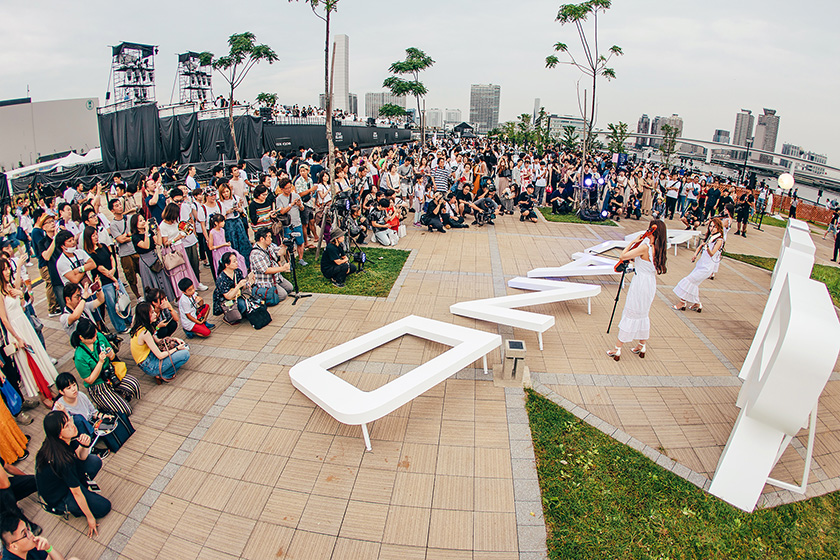 Fireworks x Performance
x Cutting-edge Technology
that expands your senses.
An Entertainment experience
that whisks you away
to a parallel world. 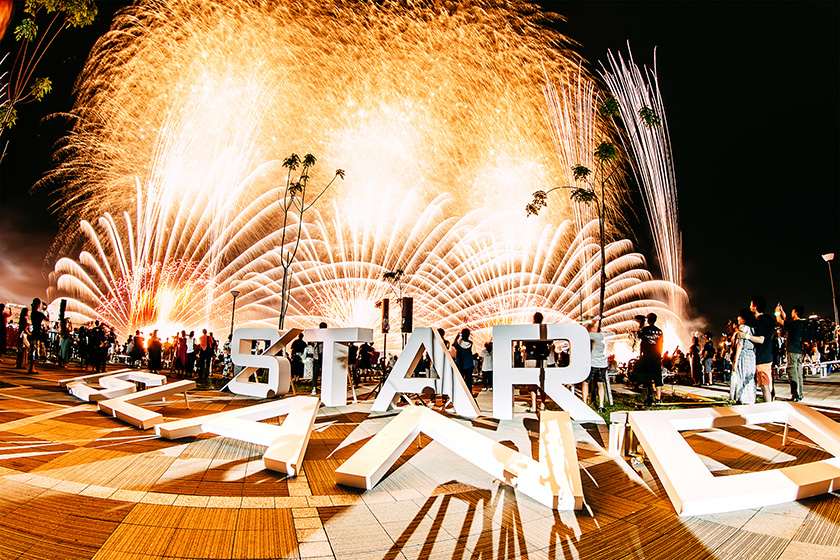 By the time you’ve made a few laps around the venue, night has fallen and the fireworks are almost ready to go. The theme for this year was “2019: A SPACE ODYSSEY.”

“Exactly 50 years ago, to the day, on July 20th 1969, Apollo 11 made its historical landing on the surface of the moon,” explained Sakamoto regarding the theme. “We wanted people to be excited for the show, as if they were about to sail out into the endless void of space themselves.”

The audience first heard the ringing of a phone through the sound of waves splashing followed by a voice, “Can you hear me?” The narration of the performance pulled those listening further into the story, away from reality. The show enthralled the audience in a vail of futuristic fireworks from a distance of 200 meters, instantly creating what felt like a parallel fantasy-like world.

The colorful display in the night sky was put together by three of the top fireworks companies in the industry; the long-established Marutamaya Ogatsu Fireworks, the Beniya Aoki company led by fireworks master Aoki Akio, and last but not least the world-renown Marugo company. The extreme closeness of the show enhanced the dynamic explosions along with details of each blast. 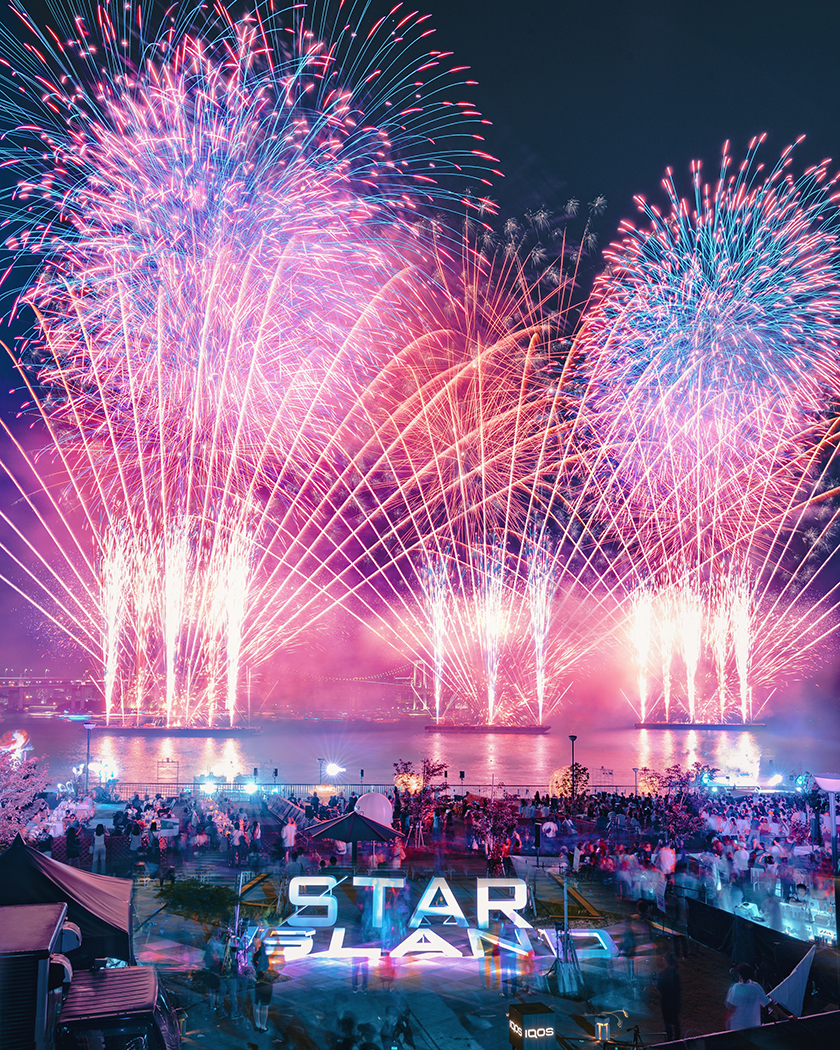 As the fireworks bathed the surrounding skyscrapers in lights, a monster performance unfolded on stage. The Kaleidoscopic luminous dance group known as KAGUZUCHI dazzled the onlookers with flames and lights joined by pole dancers, and other first time performers including 2016 world runner-up BMX rider Takahiro Ikeda, top gymnasts Natsuki Fukase, Rina Miura and Nina Saeed–Yokota from Fairy Japan and expert stilt performers for a world class spectacle that wowed onlookers in perfect unison with the fireworks. 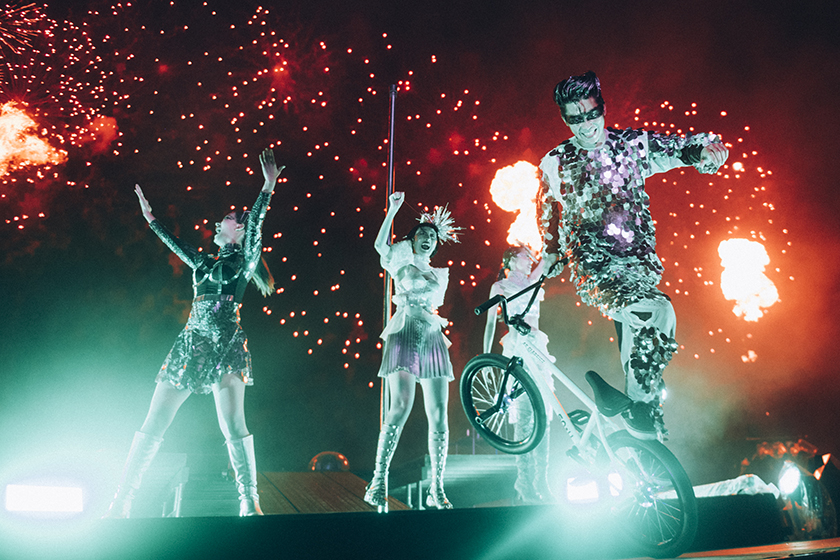 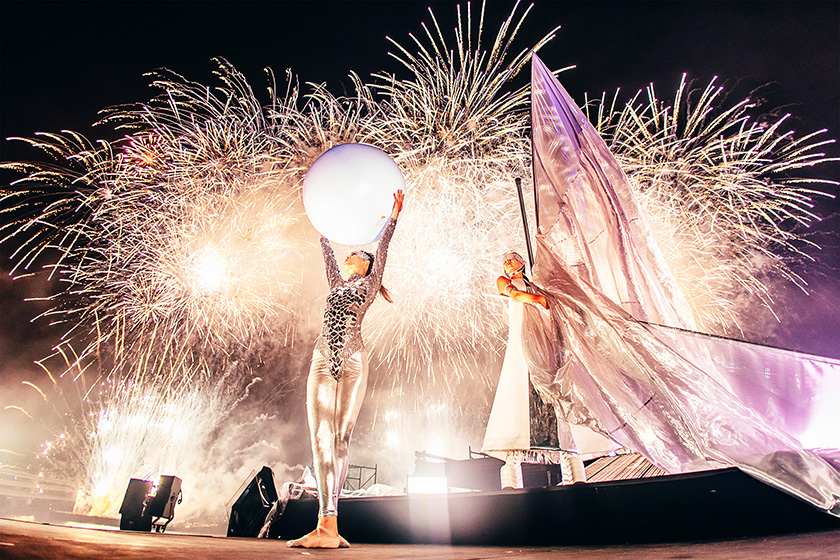 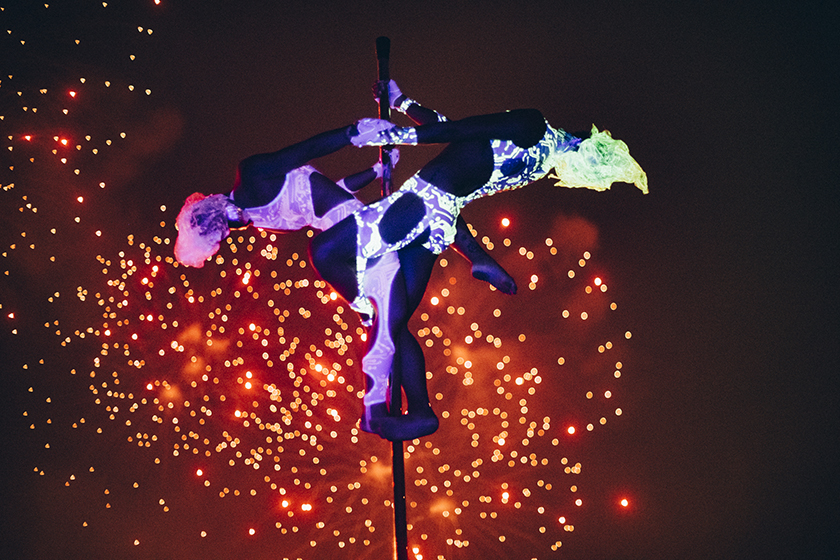 There was even an eye-opening overwater performance in the space between the stage and the fireworks by the aqua board team Team TeeDee, covered in the seven colors of the rainbow, spraying puffs of mist into the night sky. This also included kites covered in twelve-piece LED light strips, something never before seen in Japan. The performance had so much going on in different levels adding to the depth and overall stimulation of the viewers’ senses. 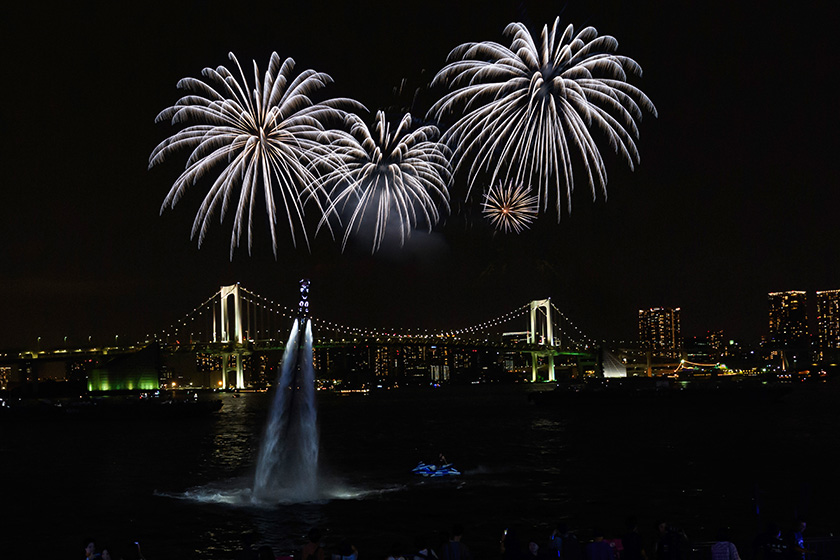 The most surprising part of this year’s STAR ISLAND was the exactness in synchronicity between the music and the performance. The story unfolded with 3D sounds of classic, EDM, R&B, and other dance music and pops boldly echoing across the beach. Despite a significant difference in beat and melody between genres, they managed to synch perfectly with the fireworks above.

Another interesting feature was the glowing LED wrist bands that were handed out to each visitor as a way to incorporate them into the show as a contributor, as opposed to a mere observer. 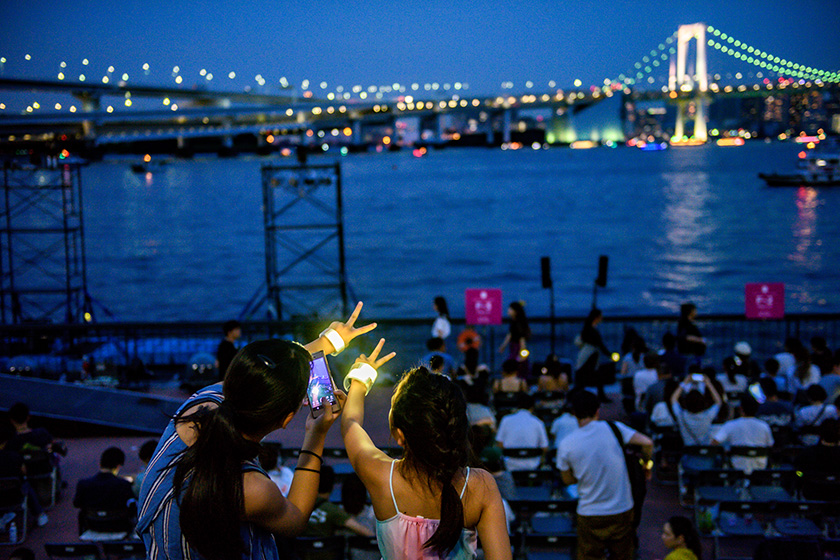 The grand finale of this stimulating space odyssey overflowed with music and lights, featuring songs like Rocket Man, also the name of the recently released biographic musical of Elton John, and Pomp and Circumstance Marches composed by Edward Elgar. A jam-packed dynamic display, worthy of being a finale, was capped with a greeting by the performers in unison. Event goers cheered and applauded until no end, suspended in the fantasy they had just witnessed.

Aimed to wow the world
as a Japanese must-see.
What’s in store for STAR ISLAND. 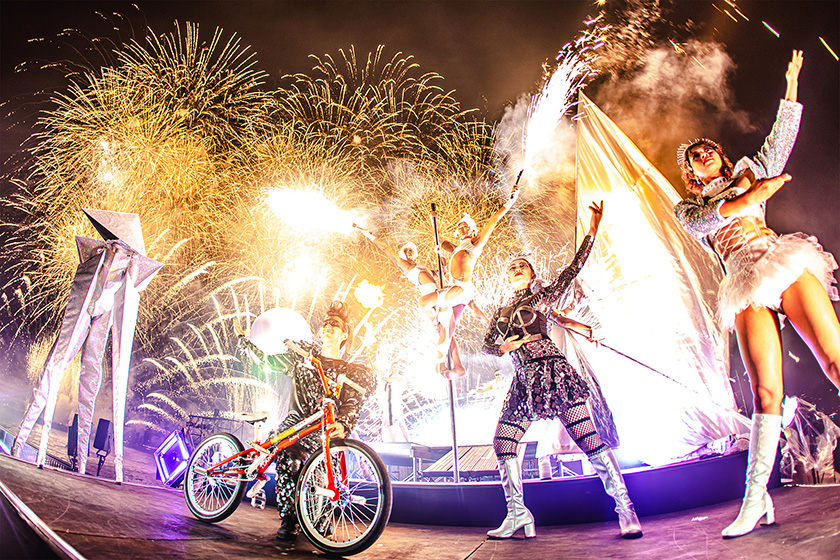 This year’s show was their third consecutive sold-out performance in Tokyo and gathered 15,000 people. It’s safe to say this yearly event is catching on well. One could even feel the expansion in crowd diversity as the event’s popularity has risen.

When asking Sakamoto at a later date about the response this year, he said, “We really felt a strong response. It could be seen in the increase in website access and since we opened up ticket windows earlier this year, we had gathered quite the attention. We also invited ambassadors and ministers from various countries as we’ve done in past years, and we received a lot of offers to hold the show abroad from new countries, so I think we’re picking up some great momentum for overseas expansion.”

It’s easy to see that STAR ISLAND is putting more focus into their hospitality in response to a broadening diversity in patrons. This was also greatly thanks to their decision to bring the venue to Toyosu Gururi Park which offers a much more spacious, resort-like feeling. It allowed for a much wider kid area, and a new place to put down sheets for viewing, amongst other things, which was a real treat.

Even looking at the execution of the show, with a closer range between viewers and fireworks and an increase in show content, quality has definitely gone up. It is also safe to say that the originality of this “sense-expanding” entertainment, sets it way apart from the rest.

It seems that on its third successful year, STAR ISLAND is ready to kick it in gear and expand even further abroad. On September 23rd of this year, plans have already been made to produce a show in Saudi Arabia, the STAR ISLAND SAUDI ARABIA NATIONAL DAY EDITION, for the anniversary of the founding of the country. It should prove to be something special.

Sakamoto had following to say about the Saudi Arabia show’s theme.
“Through the intergovernmental dialogue between Japan’s Ministry of Economy, Trade and Industry and the Saudi Arabian Government, STAR ISLAND was singled out as the go to entertainment for their up and coming plans for cooperative agreements under the name “Saudi-Japan Vision 2030.” In hopes of building even sturdier relations between the two countries and as a way of contributing to the progress of Saudi Arabia’s entertainment industry, we decided to start talks on what direction the show’s story ought to take. We’ve chosen to go with something like this. One day, a young Saudi boy meets and talks to a falcon, which is the symbol of the Saudi Arabia. The boy decides to leave and travel the world. Ten years later in 2030, when he comes back to Saudi Arabia that has grown and developed in many ways, the boy finally realizes the beauty and greatness of his home country.”

On another note, after rave reviews for their Marina Bay Singapore Countdown show for 2019, they have been asked to produce the city’s show for three consecutive years, until the end of 2020, as the STAR ISLAND SINGAPORE COUNTDOWN EDITION. 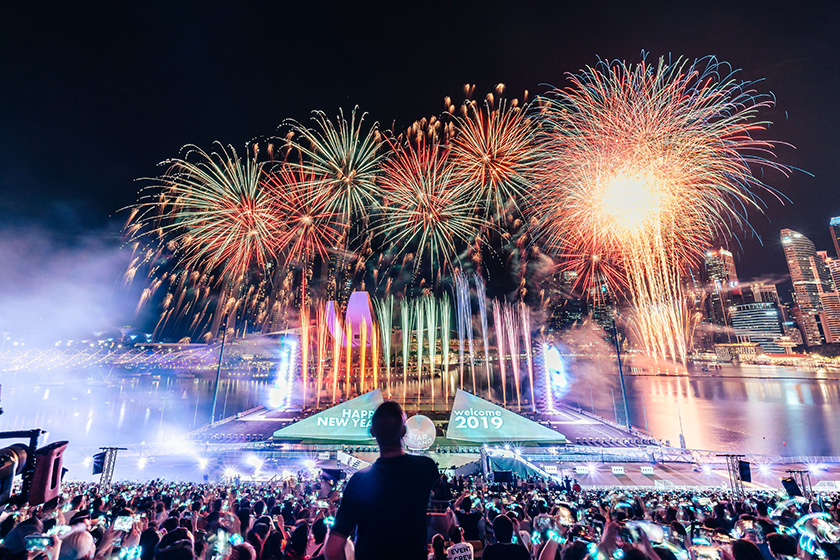 A look at the STAR ISLAND SINGAPORE COUNTDOWN EDITION. 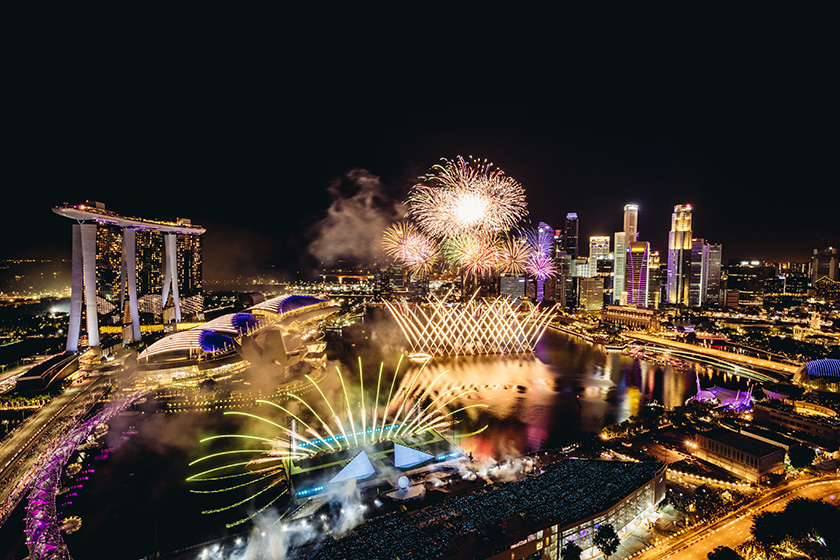 A look at the STAR ISLAND SINGAPORE COUNTDOWN EDITION.

As Japan gets ready for the Olympic Games next year and the incoming flood of foreign visitors, STAR ISLAND will have to also make the proper preparations regarding hospitality for tourists as they become more and more representative of a Japanese seasonal hallmark entertainment.

STAR ISLAND has taken the Japanese tradition that is fireworks and has synchronized it with original performances by implementing cutting-edge technology, thanks to which, their show has become an experience to stimulate all five sense—one that can mesmerize the world without the need of words. It has become an invaluable new form of Japanese entertainment. The future is bright for STAR ISLAND as we wait in excitement for their next show, both in and outside of Japan. 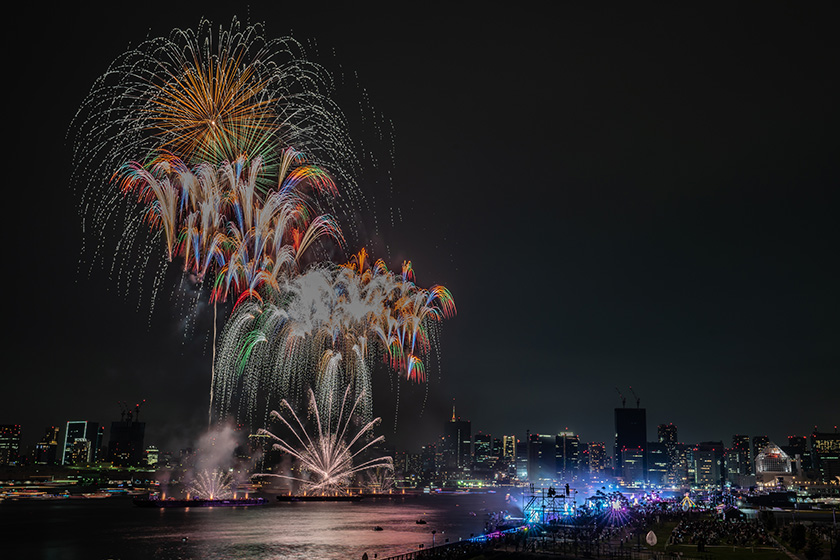