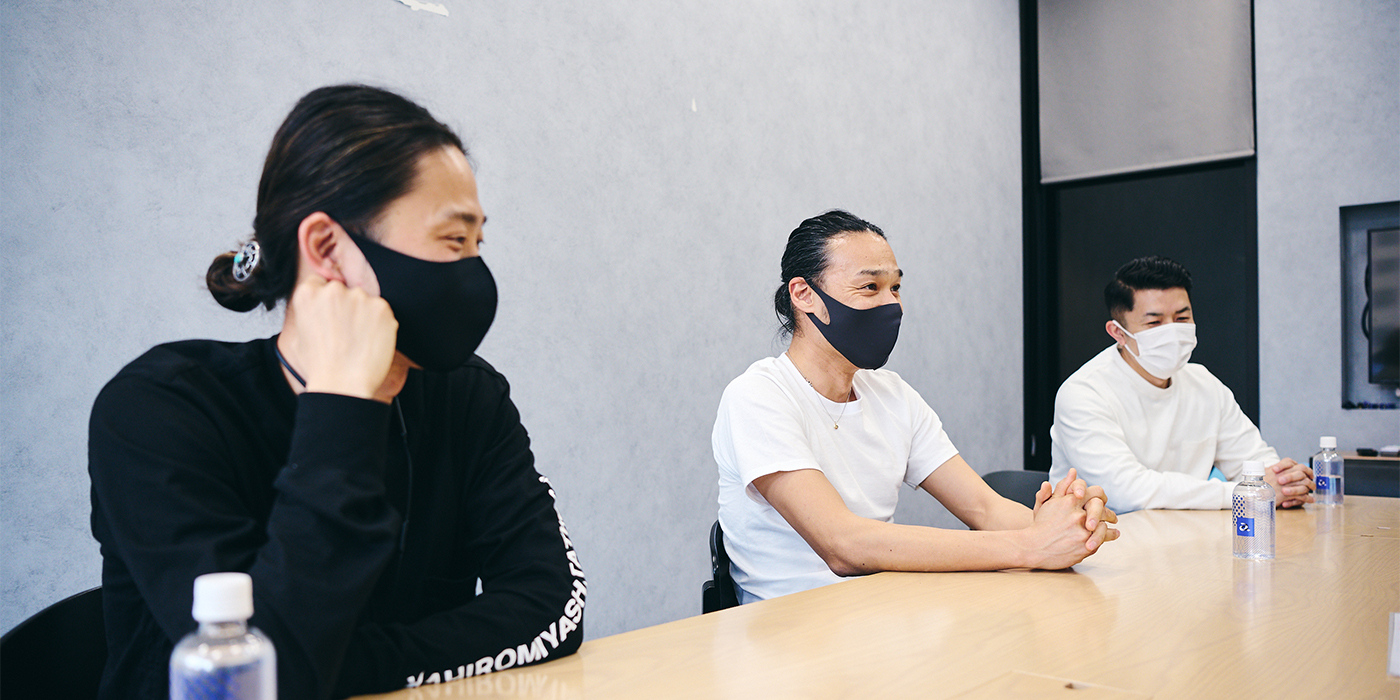 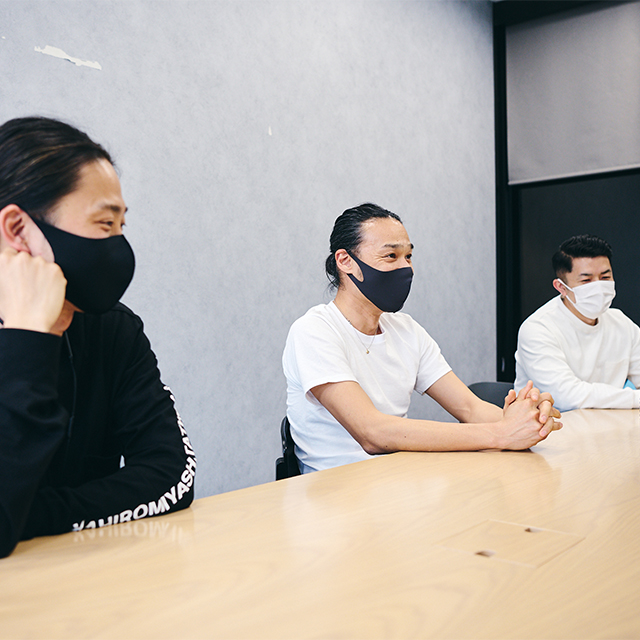 In March 2021, Avex Digital announced the launch of their new platform MD-SASS which allows users all around the world to purchase artists’ official merchandise through YouTube and Spotify. This service may very well be a shining light for the artists whose careers have been critically hindered because of the pandemic, as well as the artist management industry. In this article we introducing you to the voices of those on the front line of development — Sudo Kenta, the Group General Manager of EC projects at Avex Digital, another manager of the same group Ishihara Kento, and Mayuzumi Masahiro, the group leader of domestic/overseas project promotion at Neowing, the company handling the logistics for MD-SASS. We asked the three about their hopes behind creating new solutions through MD-SASS. 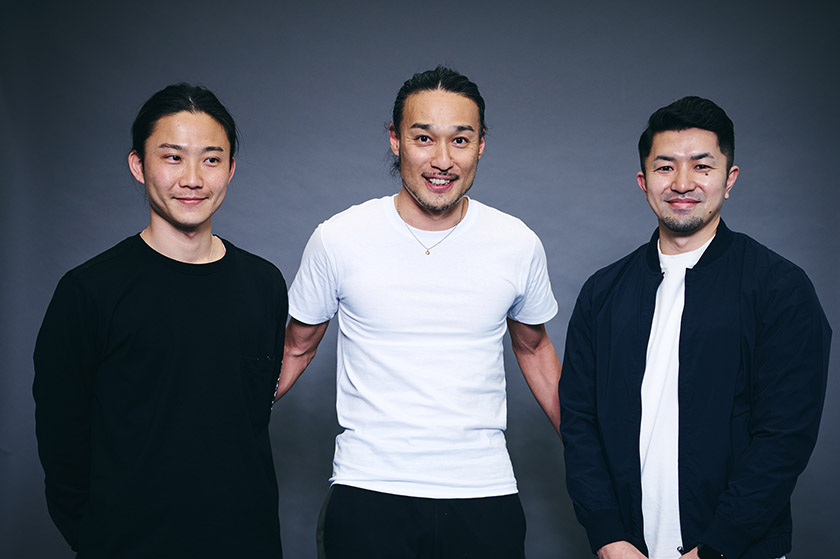 “In order to actualize a
smooth shopping experience,
a platform that accommodates
overseas customers was critical.” 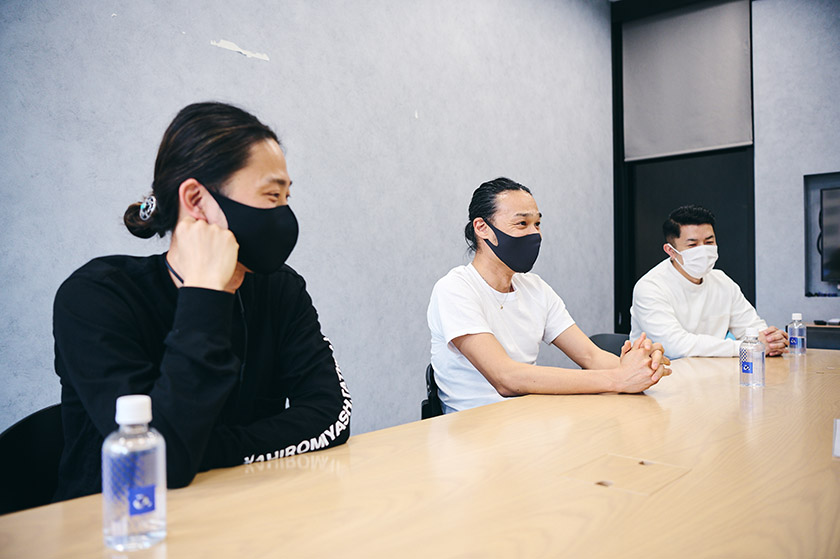 We sat down with everyone on April 1st. Just around this time last year, a few days before a state of emergency was declared in seven prefectures, the people of the country were worried about what the future would hold.

Sudo “The wave of people shifting to online platforms has risen everywhere due to the pandemic, and EC has been booming all across the world. But on the other hand, the music industry has found it very hard to get by, and for those who are involved in direct to consumer sales online, like us, sales of concert merchandise and live video products has disappeared, which has severely affected profit.”

When the world was swallowed up by COVID-19 in May of last year, the long-standing digital strategies via YouTube and Spotify that the team at Avex came up with proved to be critical, so they implemented measures to install artist merchandise shopping. MD-SASS was born from that.

Let's touch on the MD-SASS system here. Products registered in MD-SASS will be posted on the official artist channels of YouTube and Spotify through the American company MERCHBAR. MERCHBAR is the world's largest artist merchandise sales platform that provides more than 1 million products of about 100,000 artists to more than 18 million users in 45 countries and regions.

Connecting with this global platform became the catalyst for the team to develop "phase one" of their own original platform. Ishihara looks back on those days.

Ishihara “We decided to release it by the end of the year or within November, so we hurriedly gathered in-house human resources and proceeded with developing while trying to keep up with operations as we went a long.”

However, they ran into a big problem that Avex was unable to handle alone in order to move along phase 1. It was a logistics system for shipping products ordered through MERCHBAR overseas.

Sudo “It was stressful for overseas customers to obtain products that were distributed only in Japan. This was also a project that I had been considering long before COVID-19. I knew that in order to actualize a smooth shopping experience, a platform that accommodates overseas customers was critical.” 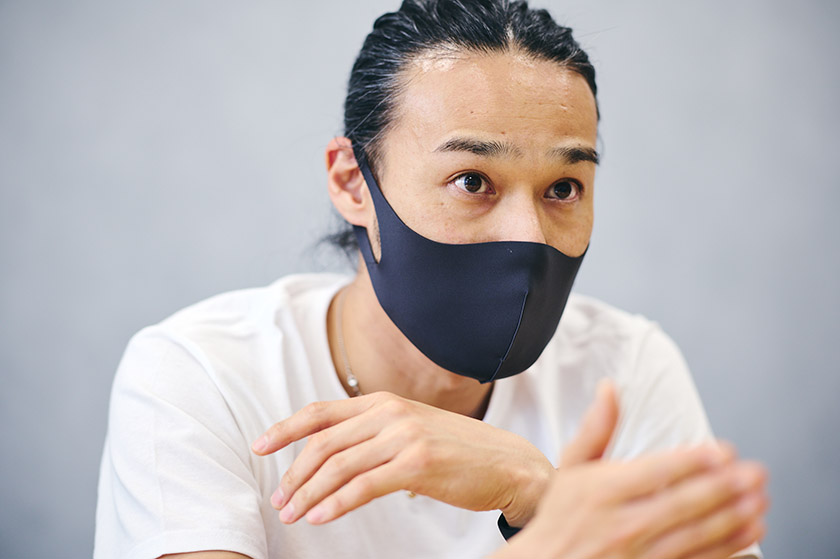 “I found NEOlogi in an industry
newspaper and immediately said
'this is it!'” 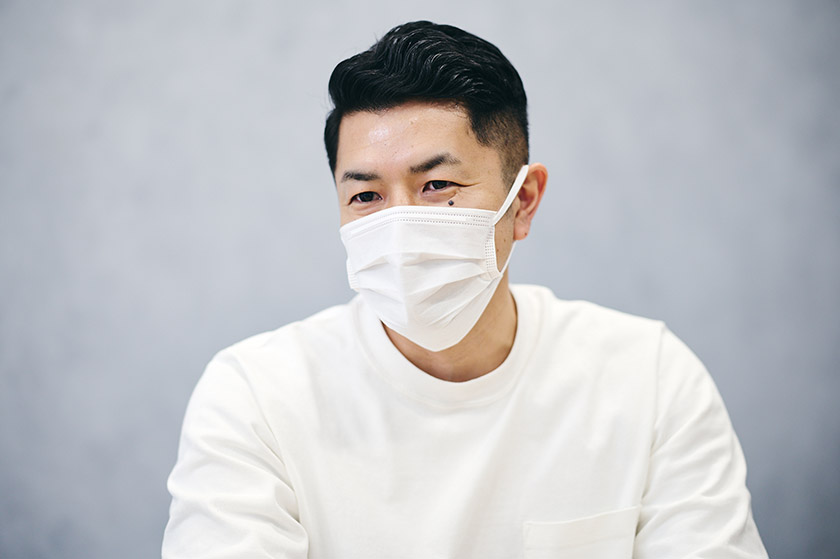 When Avex's e-commerce business group was entering their new development phase, Mayuzumi and the team at Neowing were also in an unprecedented situation. Neowing has been selling Music CDs, Anime Blu-ray and other Japanese pop culture products to more than 150 countries around the world for more than 20 years on the Neowing and CDJapan e-commerce sites. CDJapan had especially a lot of e-commerce experience with overseas as a cross-border site, and it was a well-known name in the music industry.

Mayuzumi “All 3,000 overseas shipments returned to the office at one time because the airliners using EMS (international speed mail) stopped flying. I was left feeling despaired. But within a month, we switched to another delivery service and disclosed delivery information to users with each shipment. I think that quick response has led to what we're seeing now.”

There was another project that it lead to as well. NEOlogi is a cloud-based logistics agency service that allows items to be shipped to more than 150 countries around the world and can be operated with various EC systems.

Mayuzumi “In fact, we were scheduled to announce the launch in March of last year. However, as COVID-19 continued to expand, we delayed the official release of NEOlogi to June 23. The response at the moment of the announcement was amazing. It meant that people were seeking overseas markets after all. It was Sudo-san who found NEOlogi's release announcement.”

“It was in an industry paper,” says Sudo.

Sudo “After discovering NEOlogi, I was like 'this is it!'. We had a corporate contract with Neowing so we contacted them immediately.”

Sudo “It just goes to show the importance of press releases. There is a lot of information out there for people to pick up, but when it comes down to it, if information isn't put out into the world, there's no way for anyone to pick it up.”

“As a company we've been a bit slow when it comes to releases, but since then, we're releasing more often.” Said Mayuzumi while laughing.

Avex Digital and Neowing came together at the end of summer 2020. From there, the collaboration began and quickly accelerated, and in about six months, they announced the launch of MD-SASS. This is “phase 2.” At this stage, Ishihara explained why phase 2 made dramatic progress, despite having to spend unexpected time communicating with MERCHBAR, who differed drastically from Japanese conventionality.

Ishihara “The three of us are optimistic. Being open minded became the driving force. We never used the words ‘can't’ but rather ‘let's try!’ Top management of the company also supported us to try anything. I think this was also thanks to the situation of last year, in which decisions needed to be made even quicker than usual.” 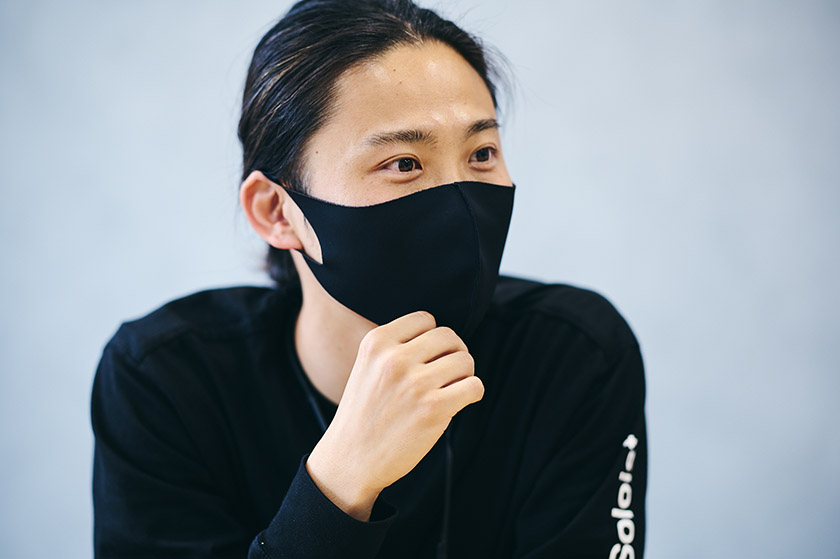 Sudo “This MD-SASS will become a model that we'll open to other companies. Since constructing this kind of platform and operating it can be such a burden, we aimed to create an environment that benefits the entire company should anyone wish to utilize MD-SASS, created by Neowing's NEOlogi and Avex Digital, rather than build their own service from zero. I think that the difficulty of entering the global market that we came to realize through our own direct sales site, is a problem everywhere. We also have to sell our products properly, but at the same time, we hope to enliven the entire industry. That's why we've entered phase 2 of our strategy to create a platform that anyone can use.”

Ishihara “After all, the impact of videos is huge. If you can post your merchandise on YouTube's official artist channel, which has already been opened and attracting an audience, they'll be recognized visually and it will lead to global publicity. Same thing goes for Spotify. When someone finds an artist they like, they learn about their merchandise at the same time. You can easily post official merchandise on an attractive global platform. At least this is where we've reached as a service for the time being.”

Mayuzumi “Being able to create a friendly shopping experience is another one of our missions.”

“Even within the digital realm,
it's important to come up
with something that prompts
motivation to buy.”

Going by these remarks, it is hard to feel that phase 2 of their journey will be over any time soon, despite the initial completion of the platform.

By the way, the full meaning of MD-SASS is MERCHANDISING SALES AGENT SERVICE SOLUTION.

Ishihara “Whether it's a physical concert or a live broadcast, I don't think merchandise will sell unless there's joy. That's why even within the digital realm, it's important to come up with something that prompts motivation to buy. In other words, it is also important to plan sales and products that specifically accommodate YouTube and Spotify. Avex is staffed with professionals at producing videos and products, so with the help of each department this will be no problem. We want to provide 'solutions that sell overseas,' not simply platforms that can be sold.”

Sudo “I think, luckily, there were expectations of us. Like that a mature entertainment company like Avex would show the rest how to come up with new curve balls. In other words, a success story unique to us is what people are quietly asking for. In that sense, I feel a lot of pressure, but I think there are many things we can do. Phases will continue to come. We already have new concepts on the way.”

Who will be the first to meet the expectations of fans around the world by making effective use of the newly released MD-SASS? Who will acquire new fans around the world and broaden their activities? It may be a while before this becomes clear. But as long as this team's beliefs remain unwavering and the phase evolves, there will be no end to the possibilities. The message written on the official website of MD-SASS closes with the following sentence.
“Believe in the power of entertainment.” 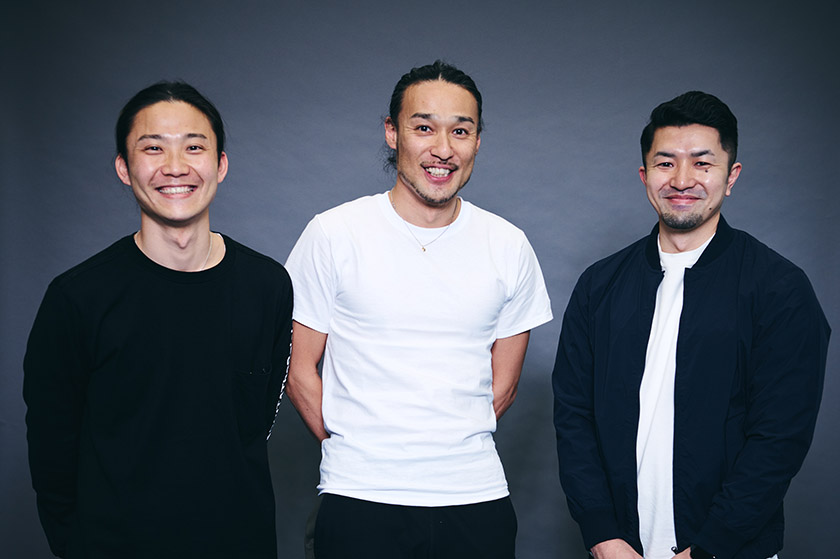