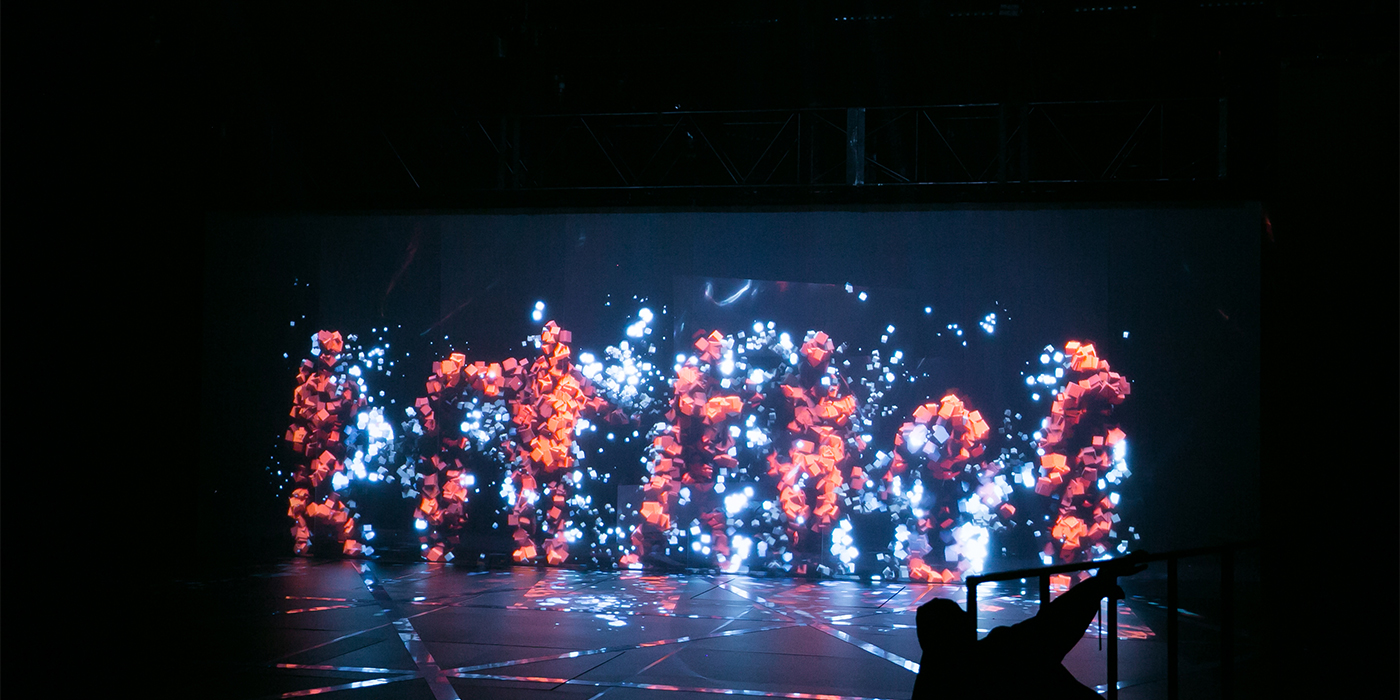 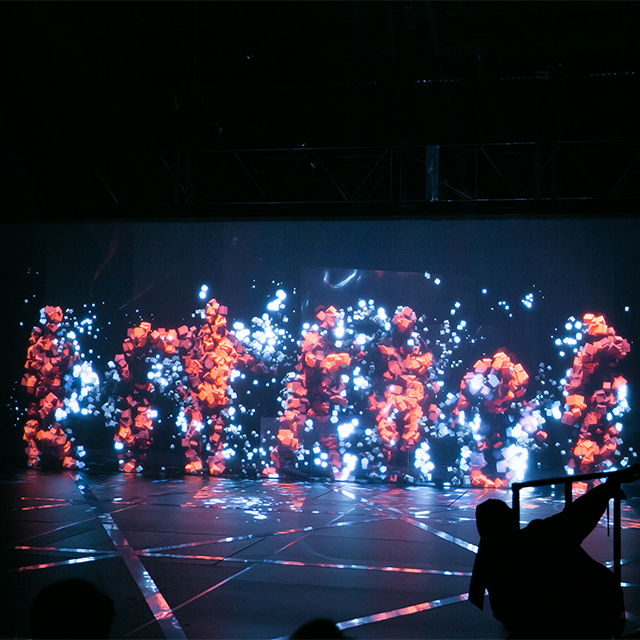 In May of this year, Avex showed what the next generation of entertainment can be with their production of ADIRECTOR. Containing two forms of content—An entertainment show featuring ninjas and a super-immersive live performance—it fuses state of the art technology with Japanese tradition/culture. Continue reading below for a full report on the event as well as an in-depth interview with director Shogo Nakamae from Avex Entertainment.

A fantasy-like dance performance in the future with a new breed of
augmented reality.

The event started with the so-called Ninja Entertainment Show. Presented by a team of modern-style Ninjas, this never-before-seen performance was a collaboration between dancers and extreme sports specialists with skills in everything from Tricking and Parkour, to wall trampolines and street workouts. The impressive acrobatics rival not only fantasy, but gravity itself. 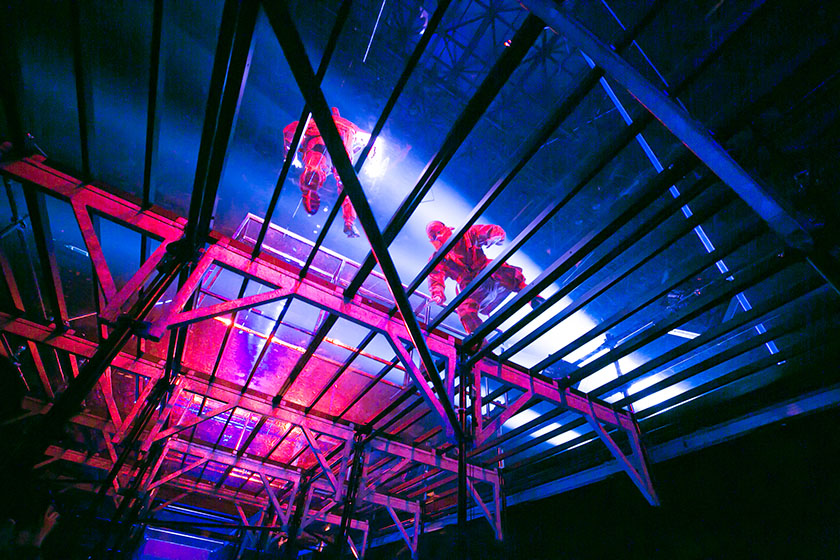 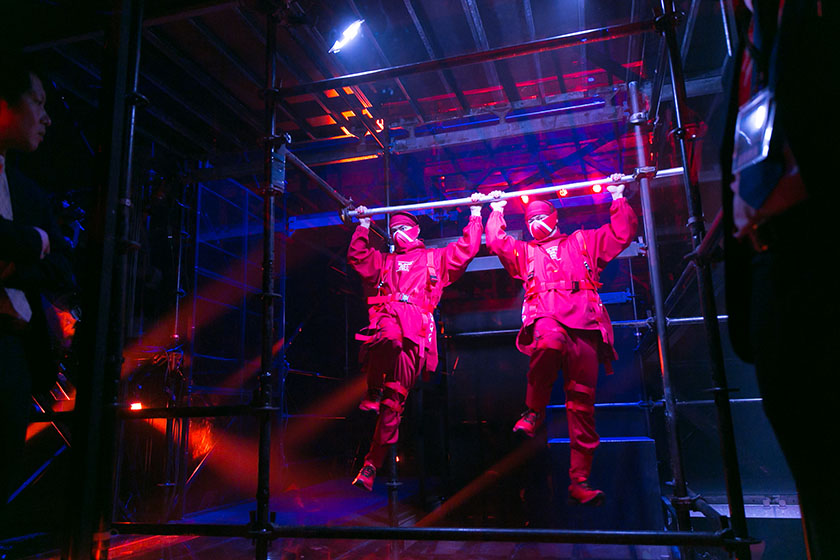 The second act featured Taiju Fujiyama—a world-famous Tezuma (traditional magic) master—as a spy. Using tracking technology by the media art specialists at i_to, lasers were pointed at Fujiyama’s wrists and ankles for a neo-marionette performance, an extension of the company’s show at Tech Open Air in 2018. 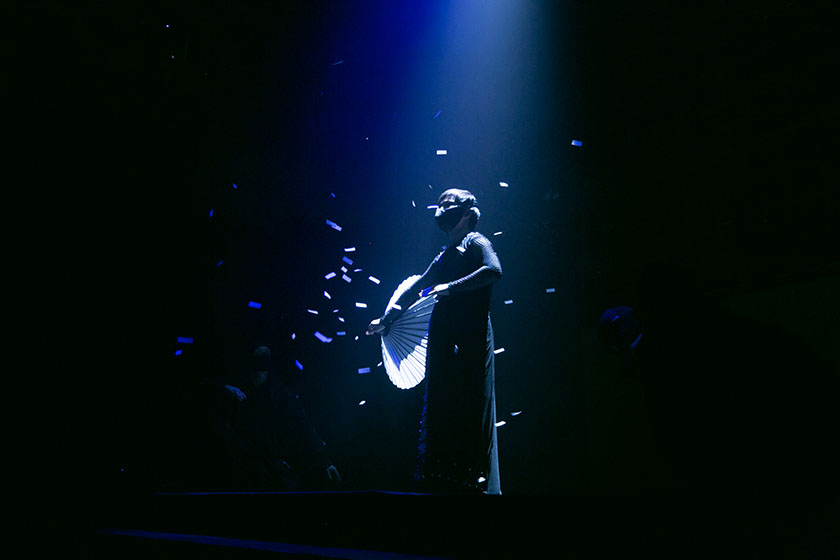 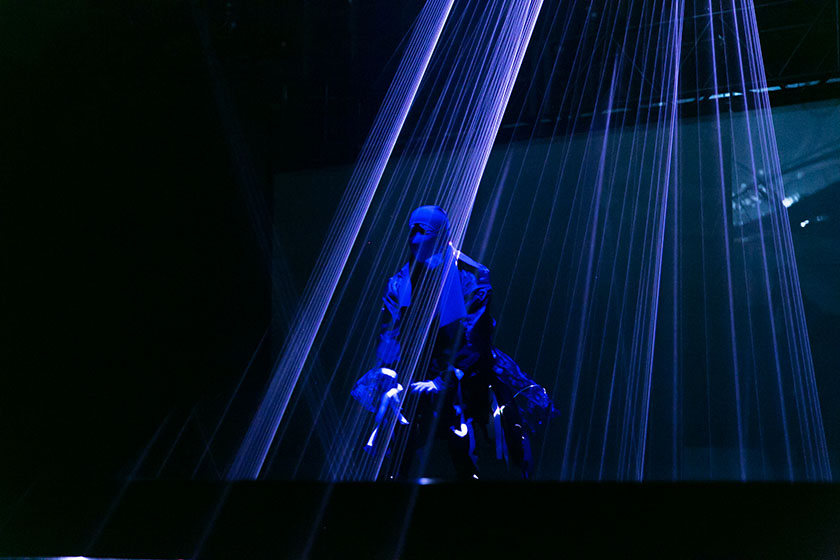 The third act offered a special augmented reality dance performance behind a transparent screen, featuring both real-life dancers and virtual ones for an AR experience like no other. 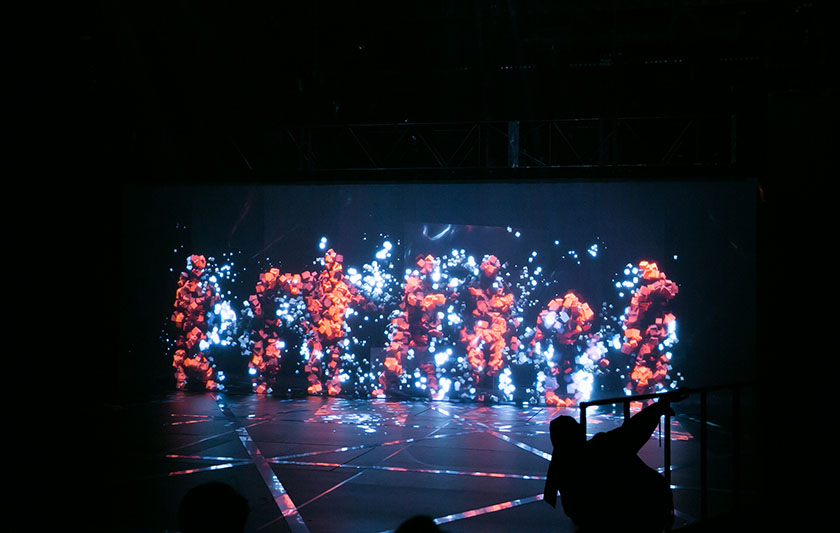 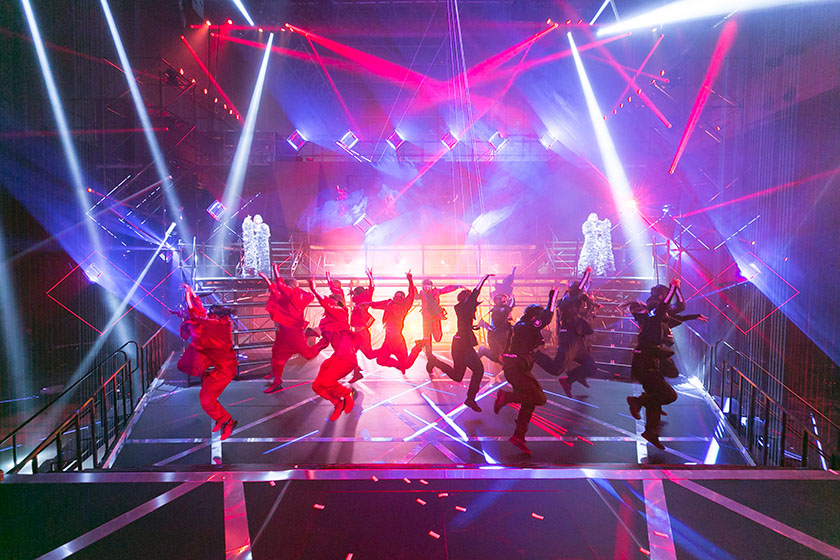 The next experience that awaited viewers was a super-immersive “concert” that utilized technology such as ACRONS, produced in collaboration with Panasonic and ALiS zero with Yuke’s. It included appearances by AR artists, YouTubers and AI singers, such as ARP, Hatsune Miku, Hibiki Ao, Marinasu, and AI Rinna. Despite the lack of any physical appearance on stage, the show possessed a mysterious sense of reality, hinting at what the future holds for live performances. 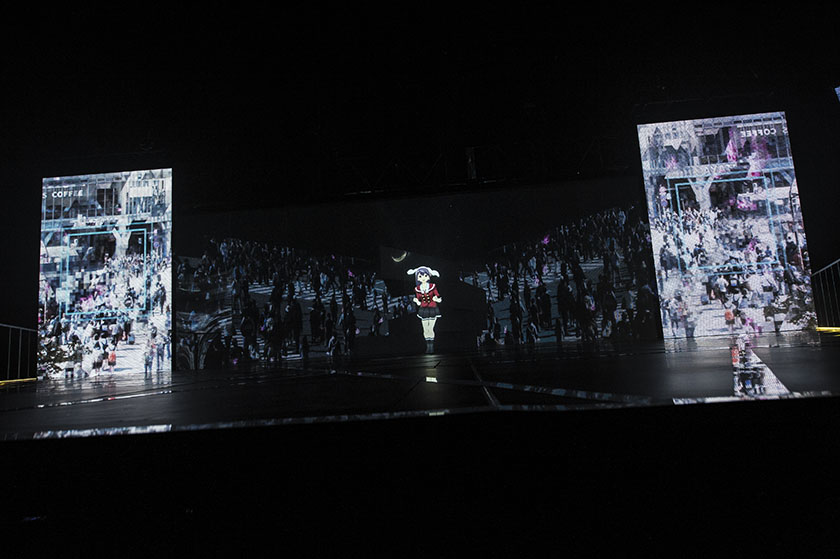 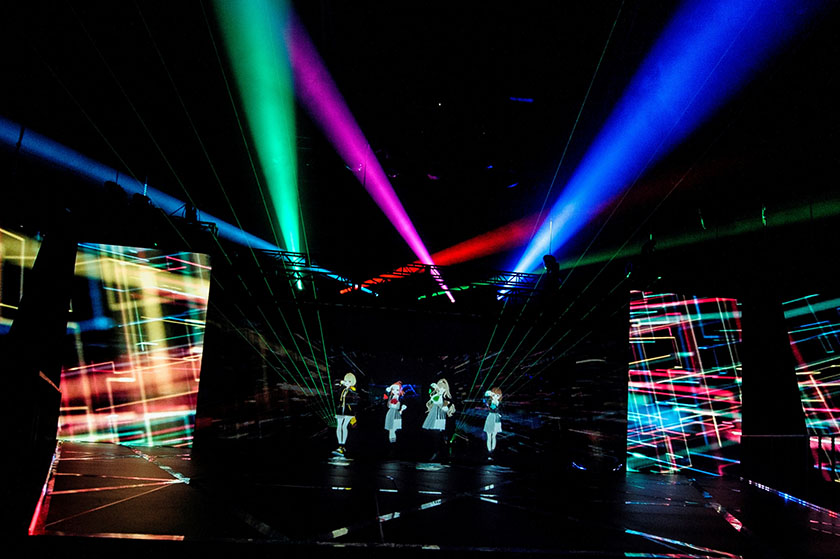 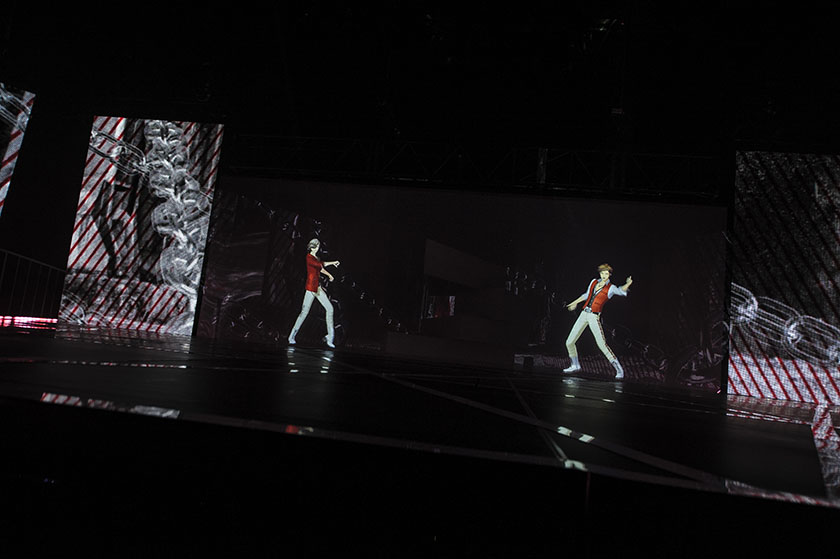 Audience-led ideas—leaving directing in the hands of viewers. The new form of consumerism Enter-tech makes possible. 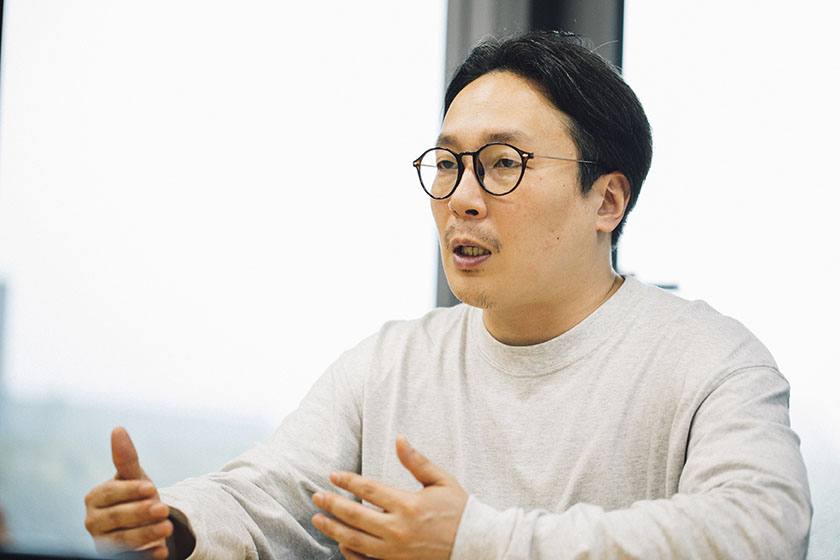 “Avex is most commonly seen as being a record label, but I’d like to change the preconception when it comes to “enter-tech” (entertainment technology). It has to do with the idea of “making experiences and selling them as commodities,” that we often hear. The part of the music industry that creates packaged music, or the “music-track/sound source” industry, is more or less “retail,” so record labels have had close relationships with manufacturers. The material used is very clear-cut, so it is easy to digitalize. In that sense, this industry has been made to digitalize its material and stand at the leading edge of change. But ultimately, our industry of making packaged music, is often confused with the music industry itself. Since our business has been going well over the years, it has, as some point in time, been placed above the music industry. That might have made sense at the time, but when I think about it now, music itself is much broader and offers much more possibilities than we ever could. That’s why I think music should be placed higher up on the pyramid. Selling music as a form of material has become a cliché. We must learn from the unknown and pick up on the small things, no matter how small. That’s going to be very important in the coming music industry.”

Nakamae says the future of entertainment that sells experience as commodities has, as a matter of fact, a lot to learn from the past.

“The music industry has evolved alongside technology for and by “experiences.” The car radio, the cassette tape, the Walkman, CD, iPod, all of them. It hasn’t grown as an industry thanks to the improving of sound quality or performance. For example, the record selling business started in the 1900s and after the radio came about twenty years later, the demand for records dropped drastically. The reason it came back again after that was the jukebox. That is the perfect example of creating an experience and selling it as a commodity. One could show off their taste and selection of music, they could choose the right mood to dance with their loved one, and more. It’s the same thing that live performances are having on the music industry right now. They’re making a comeback. Basically, using music as a medium to do something else isn’t anything new. It’s history repeating.”

According to Nakamae, from the music industry’s point of view, music is ultimately an experience, and the industry is able to keep going thanks to the commoditizing of this experience. This fact hasn’t changed.

“Another example would be subscriptions. A subscription is basically the experience of being able to access songs that you may like, at any given time. In which case, a form of artificial intelligence would be necessary.”

So how would Nakamae like for viewers to experience ADIRECTOR? The hint lies within the name of the show. The “A” in ADIRECTOR stands for the individual, while the “DIRECTOR,” as one might guess, stands for the person who makes the decisions. Nakamae came up with the name himself. In other words, it’s “audience-led” entertainment.

“Put simply, ADIRECTOR creates a new live experience through interactive communication and the use of technology. Put another way, it is the opposite of ‘audience.’ Audience comes from Latin, meaning ‘to listen.’ It then came to refer to a group of people collectively and passively receiving information. But the state of direction and communication has changed with the times. TikTok, for instance, is the exact opposite of that—the ‘passive input’ form of communication that the music industry has based their designs on up until now. Not only do users not dance the way the designers may have wished them to, but fact that users are the ones doing the broadcasting means they are no longer the audience. So after we realized this current state of communication technology, we tried making a show that leaves as much as possible up to the people. I think it’s these kind of ideas that helps the music industry carry on and grow.” 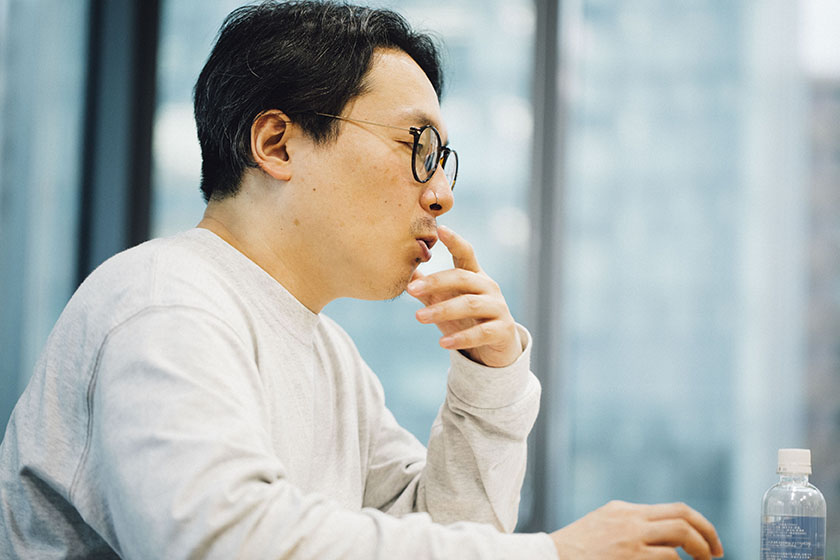 Augmented and/or virtual reality makes this possible, and Nakamae had the following to say about how this technology can be further utilized in the entertainment market of the future.

“One needs no explanation about the good in VR and AR as a technology itself. It’s in the freedom it gives you when you are no longer bound to the laws of physics. That’s why we can change outfits and lighting in an instant. So who does this for us? It’s the viewers. The creators give the choices and the viewers make the decision somehow, collectively. It can be any way, say, a majority vote, or even a minority vote. What one sees as visuals, say, whether something appears three dimensional, or aesthetically pleasing, simply depends on the hardware. I think the part that we at Avex really needs to put focus on is exactly how we communicate with the users, the customers.”

When thinking about what new type of experience Avex could provide, what kind of content they wanted to make, the one keyword that came to mind was “inbound market.” The amount of overseas travelers coming into Japan increases every year, and has quadrupled over the past five years. By 2020, they say that number will reach forty-million. As the former manager and director for the band FACT, Nakamae has actually done polar opposites at the same time (outbound and inbound) by having the band debut in the West first and then “importing” them back into Japan.

“Pushing to make a band big abroad before importing it back into Japan was pretty much a new thing back in the early 2000s and FACT was one of the pioneers in that sense. On the other hand, I don’t think I was truly able to show the rest of the world a unique part of Japanese culture that only we had. At the time, the inbound market here in Japan was nothing like it is nowadays and you had no choice but to go outside. And since that meant high risks, it had to be something that suited the Western market. Now that future patrons are spilling into Japan, and the inbound market is growing, I feel I’ve got to make it my goal to really drive appeal to Japanese culture, as a businessman, as a director and as an individual Japanese citizen.“

Nakamae sees a real strength in Japan in regards to AR and VR.

“I think that live performances utilizing AR is a real Japanese thing. Being a stickler about making things realistic is for Hollywood. It’s a style of the West. Which of course is amazing in its own right, but I think Japan is more suited to, say, a Hokusai Katsushika kind of style. Hokusai was able to draw one-point perspective pieces like in the West, but he chose not to. I think the two-dimensional approach is what makes Japanese Manga what it is. And it matches perfectly with AR. I think both VR and AR are going to require this kind of singling out of style in the future. And I think that the Japanese are really good at doing that.” 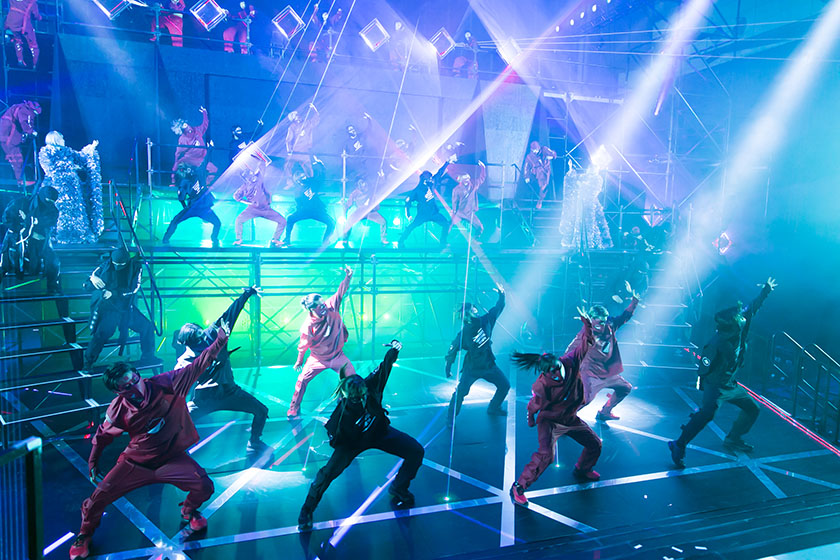 Ninjas are recognized by an enormous amount of people outside of Japan. According to one study, Ninjas are right up there with sushi amongst inbound visitors. If ADIRECTOR is able to continue to put out original content in the ever-growing inbound market, how does it plan on doing so?

“I see ADIRECTOR being on a higher level than it is now, in regards to being a medium in showing what directing can be, so what we’re doing now is just a temporary concept. As for ADIRECTOR now, however, I would like to have the audience continue to decide on things like the color of the lasers, or what type of jutsu (magic) the ninjas will use when multiplying themselves, like, do we depict them made of earth, or fire, or smoke. Putting as much of the directing process in the hands of the viewers and being able to continue to create something that gives us that kind of affordability, that’s what I think will be crucial. Making revenue by creating fun for event-goers. Pursuing this is, and always has been, what entertainment is all about.” 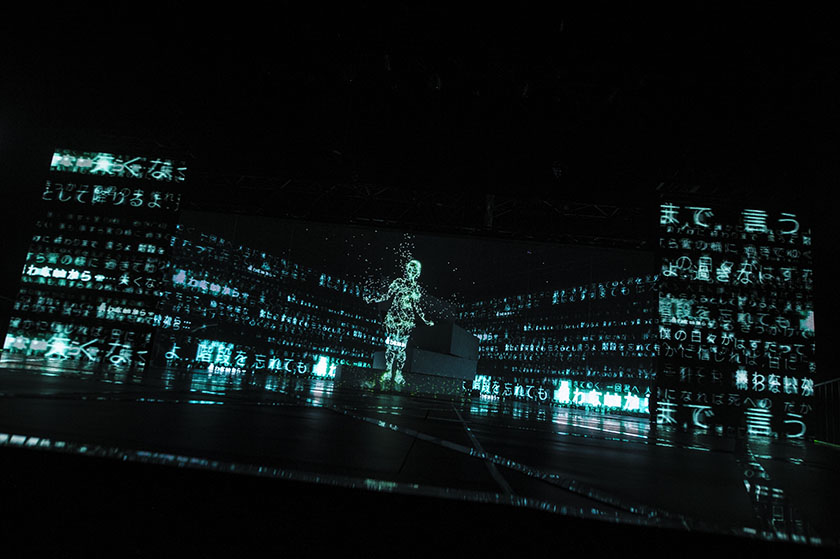 It is worth noting that this project is made possible through the open cooperation of the Japan Ninja Council, Panasonic, Microsoft and many other partners and content suppliers.

“Ninjas and AR are both forms of Japanese IP, so we want to include a lot of enterprises in the project. It’s not something we want to handle alone here at Avex, but with everyone. It’s not like we are trying to hedge risks by creating a production committee, it’s that we wouldn’t be able to create this kind of show, at this scale, without doing so. Hokusai Katsushika is a long-living true and tested part of Japanese culture and live AR performances are bound to follow in his footsteps. It all rests on the traditions made by our predecessors, like Osamu Tezuka and Katsuhiro Otomo. I think that rather than aiming to create a bigger pie from which to cut your piece from, being conscious of giving back to society and culture is exactly what allows you to scale.”

On September 22 (Sun) and 23 (Mon/Holiday) of 2019, Makuhari Messe will host the DIVE XR FESTIVAL, bringing music from the world over, including a wide array of AI and VR artists to one location for a special event the world has yet to see. Don’t miss what the future holds for Avex’s ADIRECTOR as they continue to raise the bar for new enter-tech in the music industry.