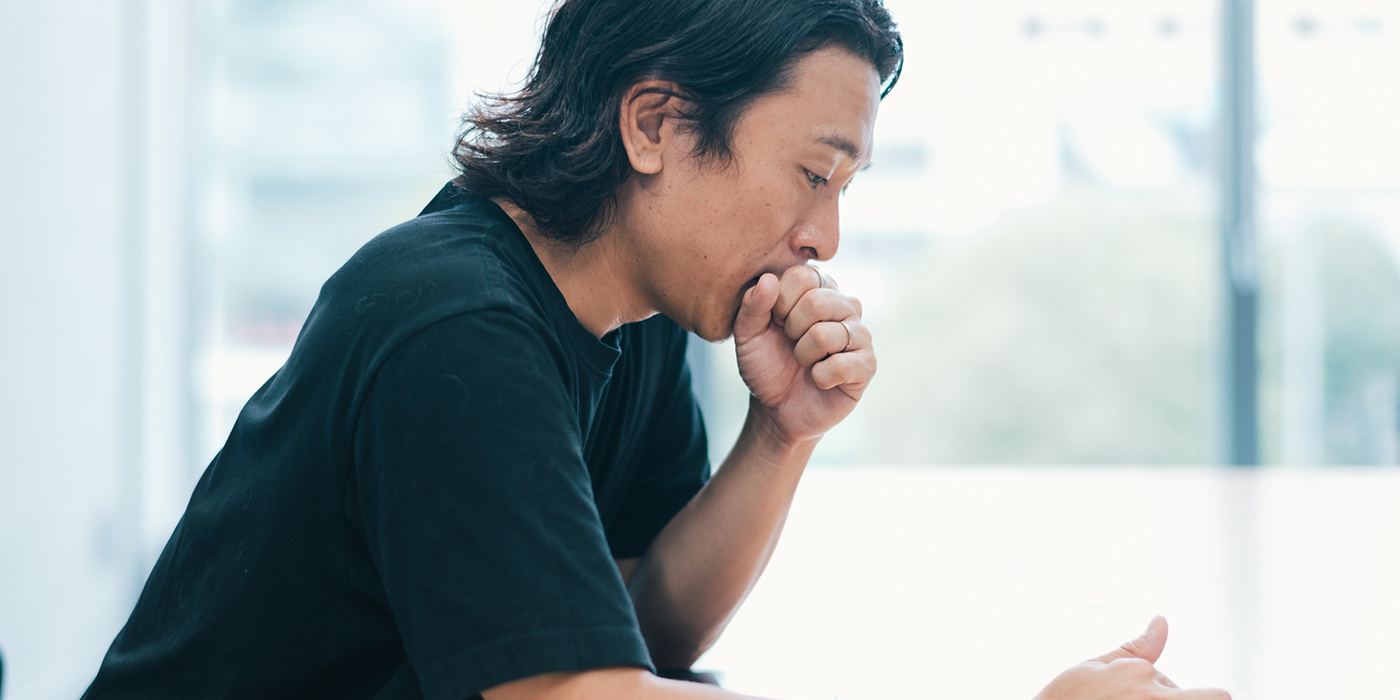 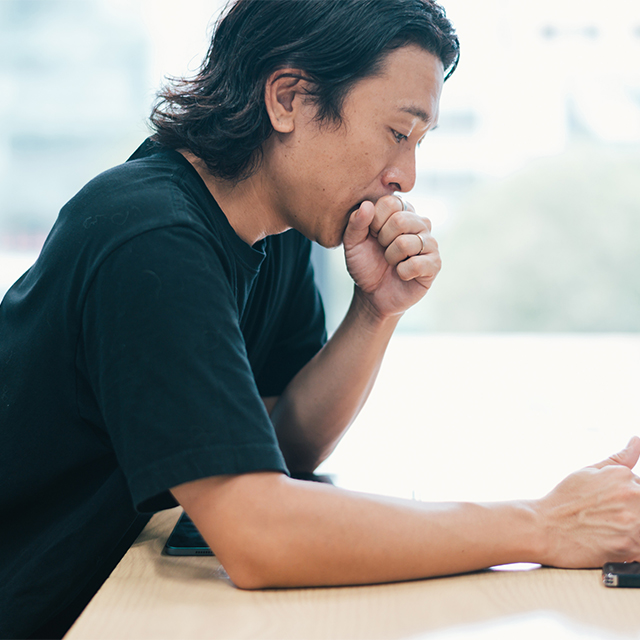 The Music Subscription Market
and 5 Years of AWA.
The Strengths of Service Based on
Rigid Trial and Error

AWA, a subscription-based music streaming service launched in partnership between Avex and CyberAgent, celebrated its fifth anniversary in May. In light of the special occasion, they made major updates to their website as well. We asked Tetsutaro Ono, President and CEO of AWA Co., Ltd., to look back on the five-year history of AWA, which pioneered the culture of music subscription in Japan. 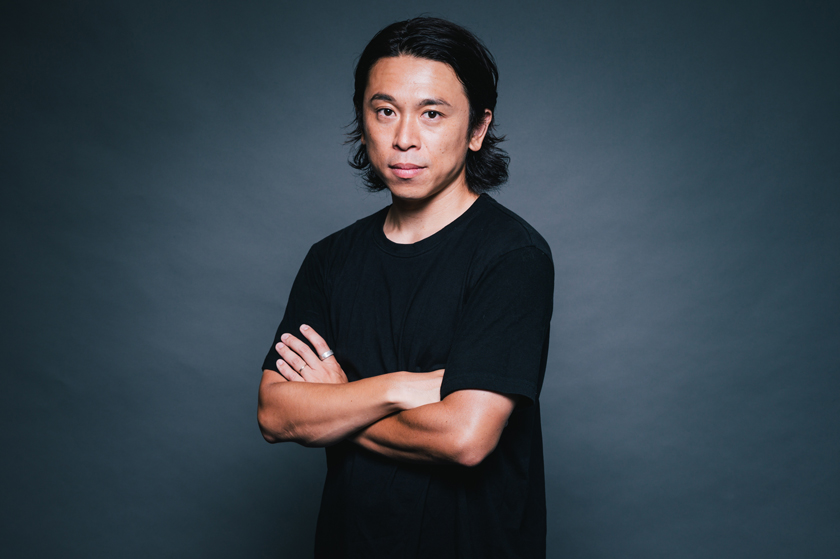 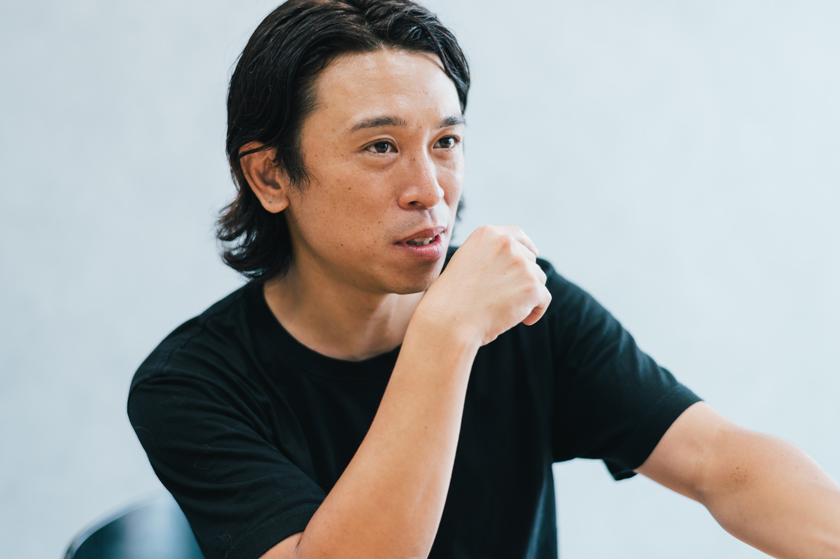 “Spotify started in Sweden in 2010,” says Ono, “but at the time it still hadn't reached Japan. Chairman Matsuura was resolved in starting a subscription service in Japan as well and was having a hard time finding the right partner to do it with. But he found just the right one after talking to Fujita. They decided that if they were going to do it, it wouldn't be Avex contracting CyberAgent to develop it, it would be done as partners, so they invested 50% each and created the company.”

It's easy to imagine that since the two companies have such different cultures, working together would be a difficult endeavor, but in fact it was a miraculous partnership that worked well from the start, President Ono recalls.

"In the first place, the strengths of the two companies were completely different, so the roles were completely divided. No matter how much CyberAgent was able to develop apps, there would be no service if there was no music. Chairman Matsuura was like 'Ok! We're making a subscription service in Japan!', and negotiated with the label to collect the music. So, it was Chairman Matsuura who opened Pandora's Box, so to speak, and from there, the Japanese music subscription market kicked off."

Competition appeared one after another, and the market quickly became a Red Ocean. The surprising part was that Apple Music's entry was about one month later, which was completely earlier than they had expected. AWA was forced to start the service with a less than satisfying roster of artists, initially launching with one million songs. In case anyone was wondering, it is now the largest service, delivering 70 million songs.

"Chairman Matsuura's strongest hope was to create a way for music to become even more popular than it used to be. Originally, looking at the history of music, it used to be the culmination of media and the hit charts that made results for the longest time. But he didn't want it to be only powerful artists and labels that made hit tunes, but for there to be a way for people who simply made good music to get heard by the people that ought to hear them, to spread it all over the world. A way that would allow people to discover all kinds of music."

Features with "too much spice"
can broaden the
enjoyment of music.
AWA: 5years of trial & error 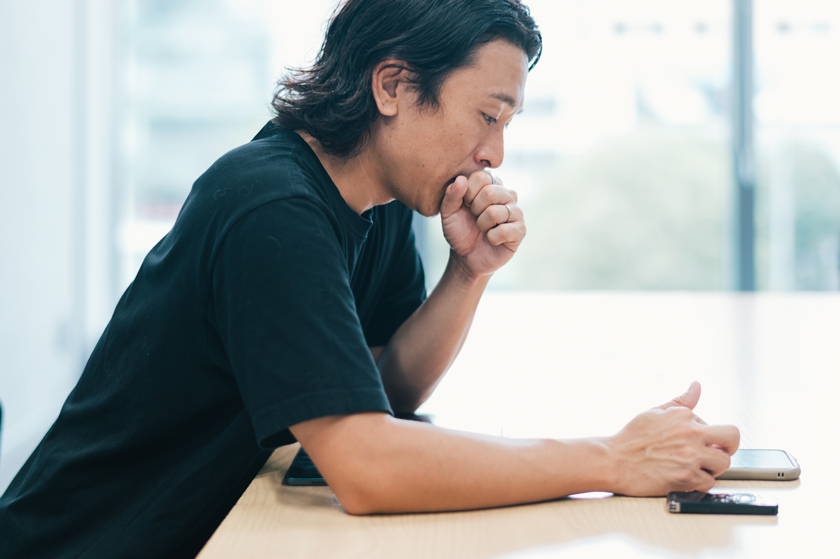 From the beginning, AWA was known for its user's playlists and accommodating recommendations. The UI of the app was also very sophisticated.

"Originally, the function of making and publishing playlists is a bit of an 'additional' way of enjoying the service, so you don't need it at first. In reality what you really should create is offline playback. But AWA was not for playing music offline. On the contrary, it had a public playlist function. We knew that competing services with large global capitals were going to enter the market, so we approached the whole thing with a different concept from the beginning. After that, we were particular about the design, and about the movement and interaction with the app when users touched the screen. We wanted to give it a feeling that an advanced overseas startup might give it." 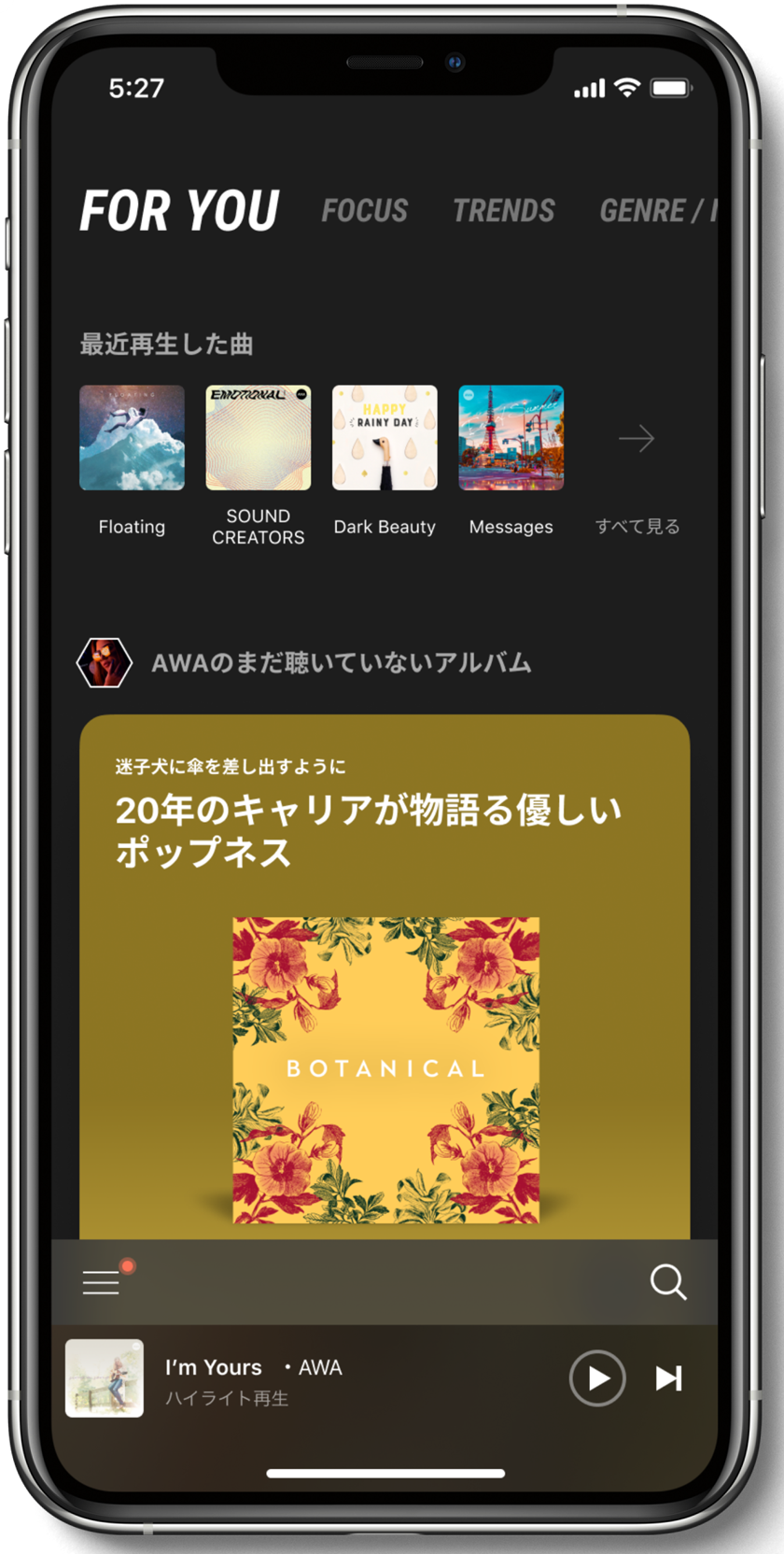 "It's always the artist's core fans that respond to the exclusive distributions. So there was no incentive to subscribe to their channel since they already had their CD or had downloaded their music. In other words, it flopped worse than expected."

Over the next five years, the music subscription market expanded steadily. On the other hand, as each competing company began to provide the same functions and songs, the market eventually became one of commodity, and became a competition of marketing and brand power. The "trial" part of their business style came in the form of a service renewal as they approached their 5th anniversary.

"Five years have passed since starting the service,” explains Ono, “and we're now at a time where the industry faces no more functions that users 'require.' At this stage, we are creating "upside functions," or rather, functions that are not necessary but are more fun to have. Our updates have been going on in stages since February, and the biggest one is our user comment function. This is a huge challenge for AWA. If you just want to listen to music, this kind of extra information is redundant, like how adding too much spice can take away from the meal. It was an idea we had from the beginning, but we hadn't implemented it. However, even if you prepare a lot of songs, if the user repeatedly listens to the music that they like, wouldn't it be better to just buy songs on iTunes for 100 yen? In order for someone to get the most out of the 70 million songs, I think it is important for them to come across different music every day, to open the app and expand the value they get out of the monthly membership fee of 980 yen."

Behind this move was the realization that people don't really step out of their comfort zone to listen to music or artists they don't know—a realization that took 5 years to reach. Of the more than 70 million songs on AWA, only about 2 million were actually listened to. Even though each company thoroughly analyzes data such as users' hobbies and tastes and characteristics of songs and makes recommendations on the top page, that doesn't always mean users will listen to new songs.

"The reason is that while data can prove some music to be the best for certain people, whether people want to actually listen to it or not it is another story. When it comes down to it, what is important is how to deliver to users. The 'wrapping.' For example, when you were a student, when a popular kid in class asked you, "Do you know this song?", you wanted to listen to it, right? We wanted to take this realization and make it a reality, so that's what we did for this update. We're putting in a lot of energy into the comment function and pop-up functions for the new AWA. Each song and each album has a pop-up-like headline that is manually added. We arrange the top of the screen differently for all users on the top page, which is a hard task itself, but no matter how good the technology is that you use to find just the right music for that particular user, if you make a single mistake in the delivery, no one will listen to it. So we're really putting effort into that part."

The comment section is for listening to how other people feel about certain tunes. In other words, it's a way to get closer to the artist. As for the pop-up functions, they're intended to help the users overcome the hurdles of listening to songs they've never heard before. This is how AWA differentiates the functions into two roles. Providing comments and pop-up functions in multiple languages in a worldwide market is no easy task. AWA was convinced that these were two realms that domestic market rivals were unable to penetrate, and aimed to break through.

We recently added a function called 'LYRIC DIVE.' We made this function in affiliation with COTODAMA using their Lyric Speaker technology, and is intended to help you overcome the hurdle of "listening to songs you haven't listened to before." Lyrics are such a vital part of music, yet even so, up until now, people usually based their choice of music on the title, the artist, and the album jacket. Lyrics always came after. So it's a little experimental function to see how it goes when we add the element of lyrics to the reasons people become interested in music." 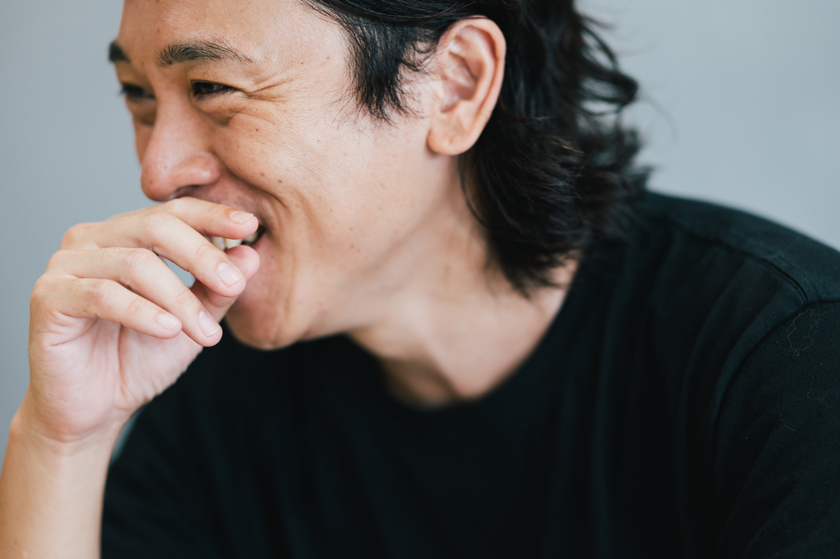 Nowadays, hits are being born from platforms such as TikTok and 17LIVE, regardless of the label they belong to. What direction will AWA take and what kind of services will they aim for in the future? President Ono talks with self-confidence.

“There hasn't been any huge changes. It's not just a tool for convenience. It's like a place. A place with a touch of humanity to it, where people enjoy using it's features. To that end, it's most important for users to come across new songs. People who listen to various songs have a longer lifespan as a customer and will spend more money on the service. So in terms of business, this makes sense. With that said, the company was started by Susumu Fujita, an enthusiastic follower of Japanese rap, and by Masato Matsuura, who basically made dance music popular in Japan. Since it was a music label that first took the reins and became the base of company, it makes me hope for more music to come into the light of day, and to reach people. I don't expect or want people to listen to what is popular. The fact that we are weaker than the competition in terms of funding and brand power, it allows us to set up an experimental way of listening to music. I think what we do have is sustainability and a hefty number of at bats.”

Due to the influence of the new coronavirus, listening to music on the go has certainly decreased. On the other hand, the demand for comment sections is increasing as people use it as a way to communicate. AWA's service isn't just a platform, its identity is clear. More than anything, they love music. That much was undeniable. 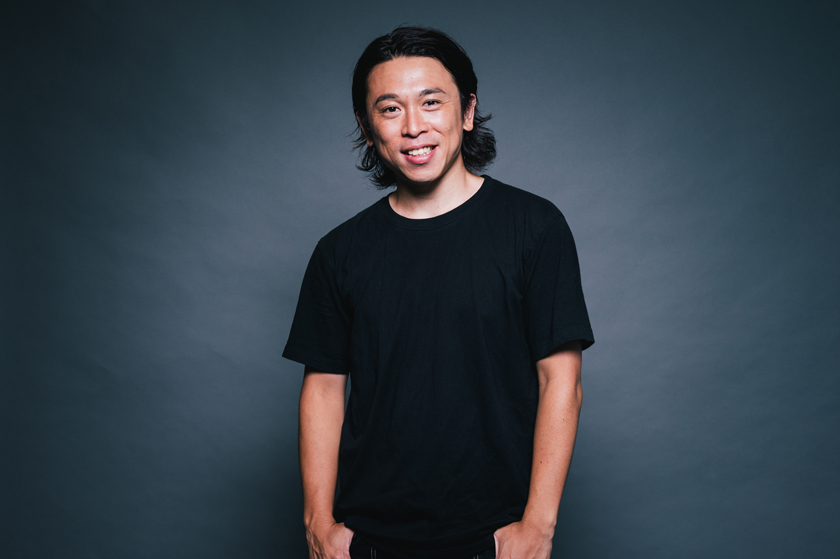