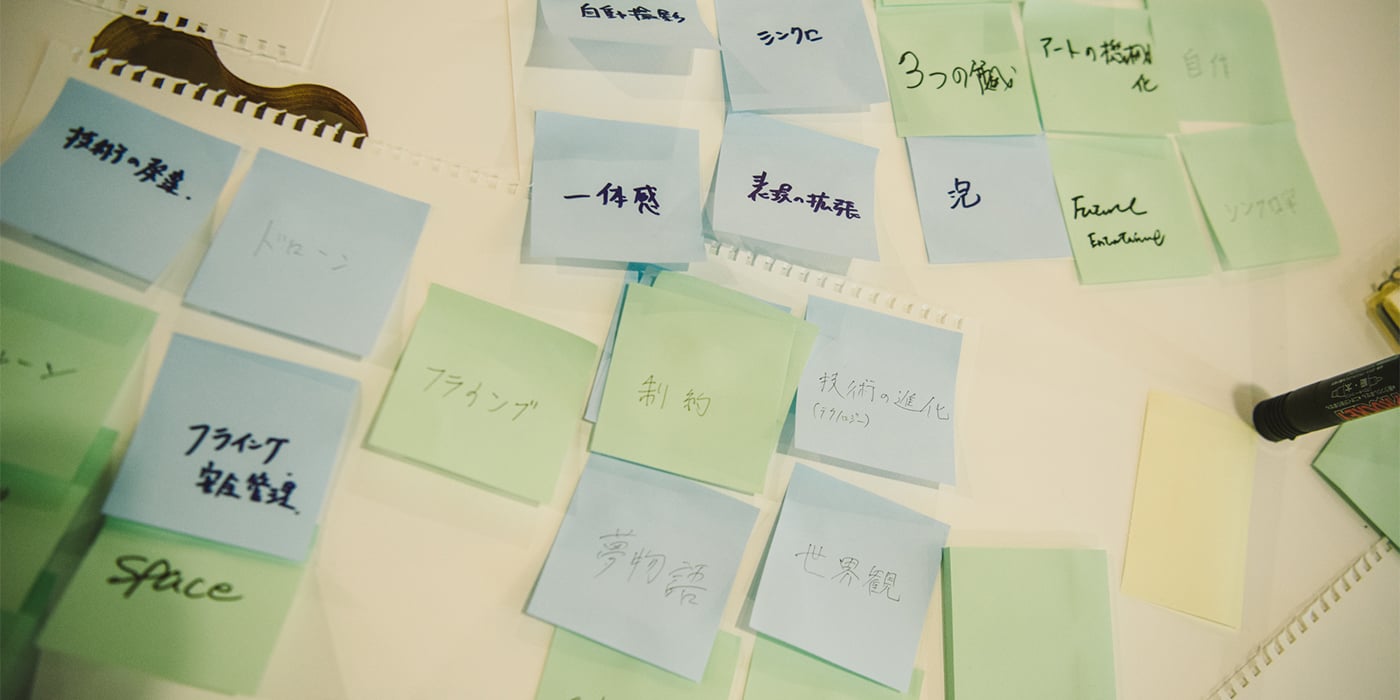 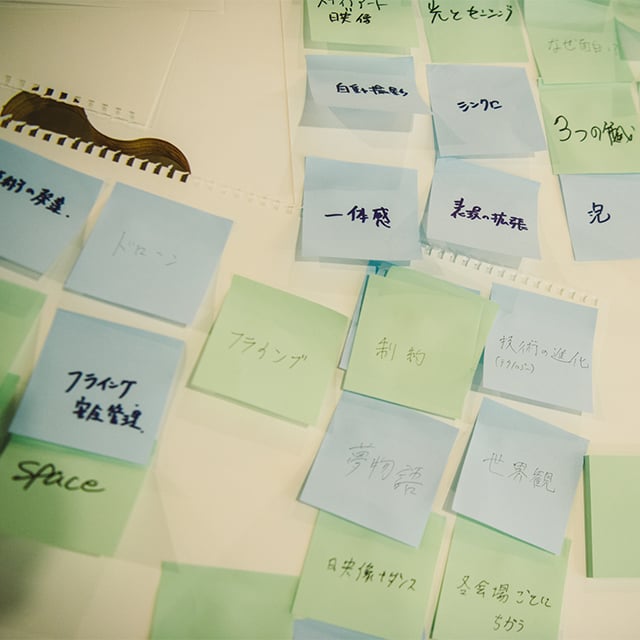 Idea competition born of constraints and randomness,
and the future it creates 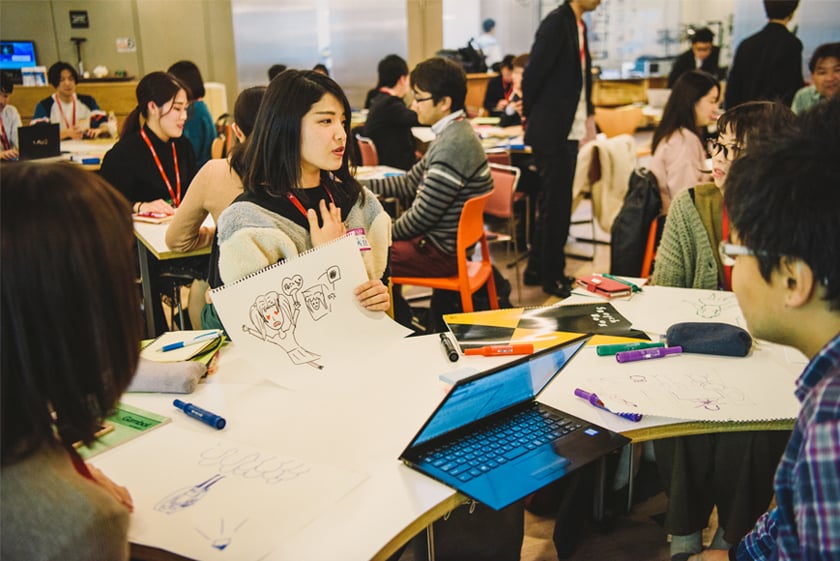 A student-only Ideathon named “Revolution in live experiences by technology” was held at BRIDGE TERMINAL, a co-working space at Sony City Osaki, on March 6th. Ideathon is a coined word combining “idea” and “marathon”. It means an event where people gathered in accordance with common theme form a group on site, discuss it, and compete by presenting newborn ideas. What is the aim to hold this event? Also, what kind of ideas were born of highly sensitive young people who will play a key role in the future entertainment world? 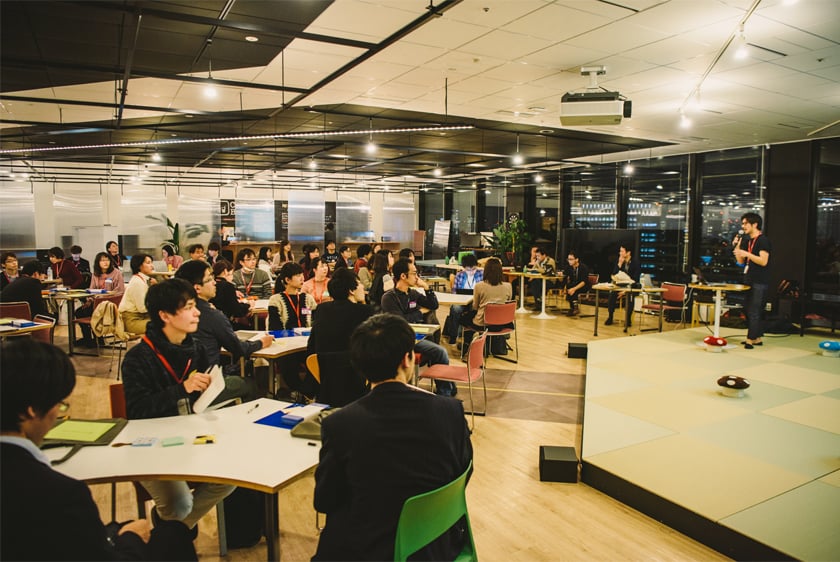 Sony's new business creation program “Seed Acceleration Program” that hosts this event started in April 2014 with the aim of Sony gathers and cultivates new business ideas outside of the existing business domain. It has linked hybrid smart watch “wena wrist”, personal aroma diffuser “AROMASTIC” and such to commercialization through internal auditions etc. so far. 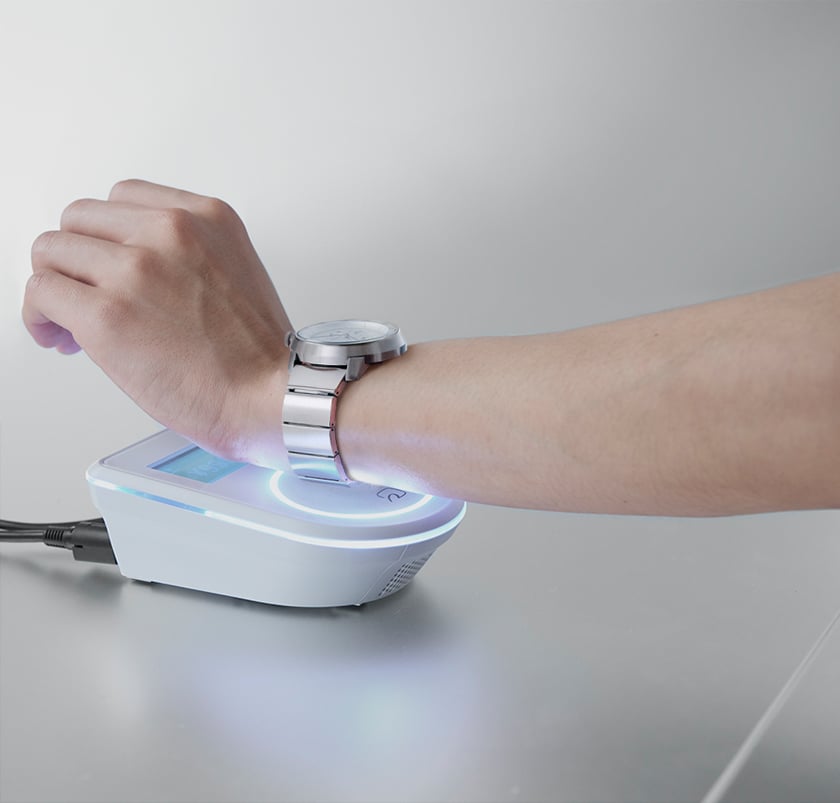 This time's theme of Ideathon is “Revolution in live experiences by technology”. Nowadays, value of music has shifted from “possession” to “experience”, and it has been proven by events such as ULTRA JAPAN, which is Avex's biggest EDM event in Japan, and STAR ISLAND which combines fireworks and 3D sounds. And most of those events cannot be explained without the existence of technology. 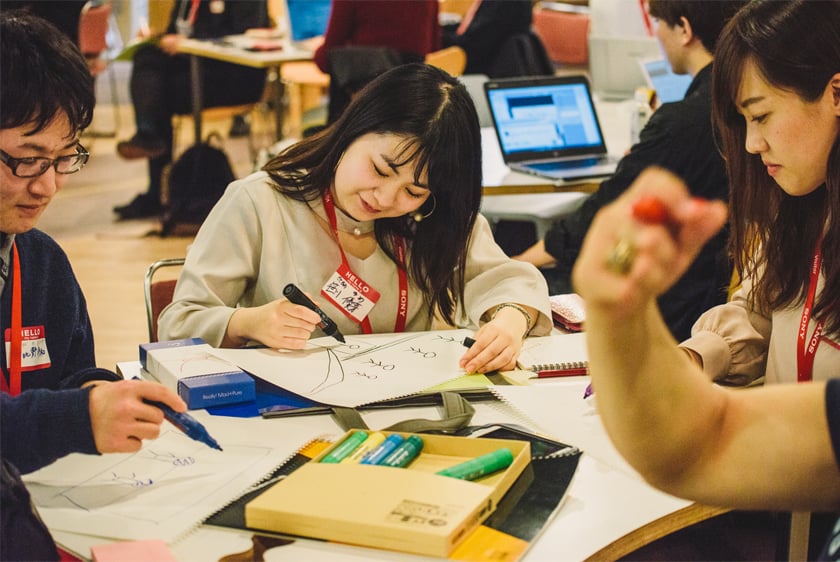 Avex and Sony are interested in each other regarding “fusion of entertainment and technology” which will be the key in the future live experiences. Also, both of them are demanding innovative ideas from young people, in other words, “ideas that are off-the-wall, but could possibly be businesses when brushed up”. Those two facts may be the reasons for them to form a tag.

On the day of Ideathon, Mr.Takanori Aoki, from this time's host Sony, introduced the project he launched: an application“PROJECT REVIEWN”, which makes it possible to bring live movies to home immediately on site. Also, representatives from Avex and Sony introduced the projects related to their respective live experiences to students, and then proceeded in a way that drew ideas that could expand and develop those projects from the technology generation called digital native. 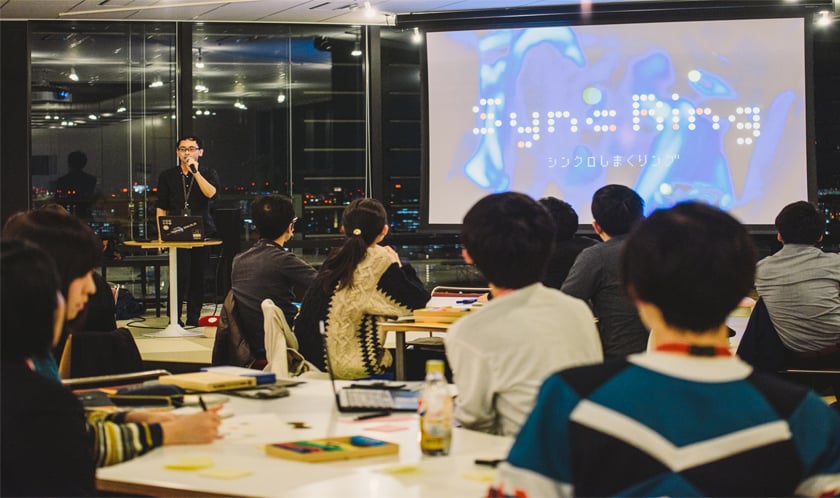 Create new ideas within “constraints”
such as theme and time

At the beginning, as a time to input, Mr. Dai Mizuochi from Sony, who produced the infrared LED emission gadget “SyncRing” and such, and Mr. Shinya Iwashita from Avex, who is in charge of many festivals and live productions such as a-nation and ZUSHI FES, took the rostrum. They talked to the students about respective persistence and struggling point in the process of subliming ideas to businesses. 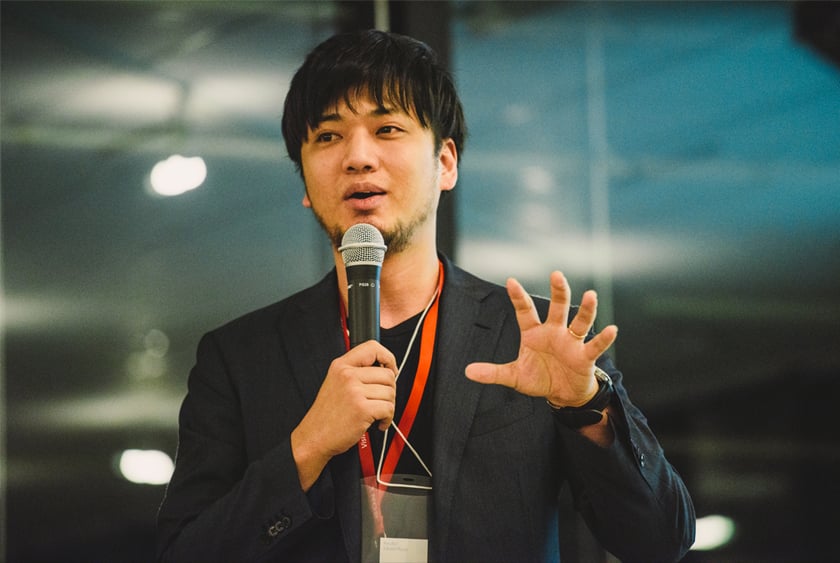 After that, Ideathon started. This time, they made participating students sit at 10 tables randomly, and one Sony employee sat at each table. Also, before Ideathon started, there were several attempts to make them create flexible ideas. For example, participants drew pictures of “things and happenings that they recently care about” and introduced themselves with them in order to make communication friendly environment, and host offered students pizza and alcoholic beverages.

Ideathon started from a personal work that each person made a note of keywords from Mr. Mizuochi and Mr. Iwashita's input talk on post-it. After that, they utilized the memo within the group, created new ideas by combining written keywords randomly, and discussed in the group. To combine randomly – it's a training of an idea to forcibly think, and at the same time, it seemed to suggest that some “constraints” were inevitable when making ideas businesses. 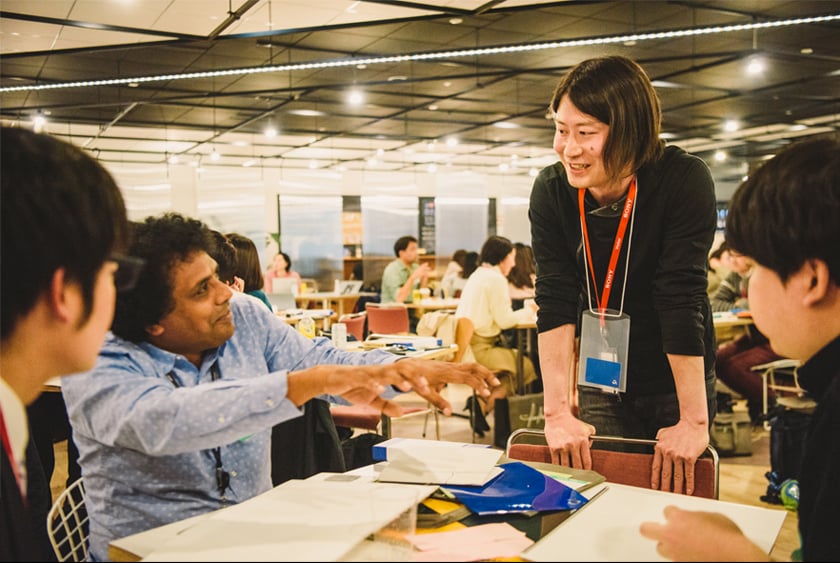 At each table, although there were some ideas that utilized hot technologies like VR and drone, when the discussion came to the level like “What is special about this idea?” “For what purpose do we use this technology?” eventually, it came to require some more creative thinking. Among them, Avex employees walked around each table, checked students' ideas and advised them with various examples when they seemed to come to a standstill.

While Ideathon which lasted 1 hour and 15 minutes had a relaxed atmosphere, students exchanged ideas with intense expressions until the last minute, and some of them seemed to be willing to discuss more. However, “constraint” within a fixed time is also an important point to nurture the ability to create ideas. 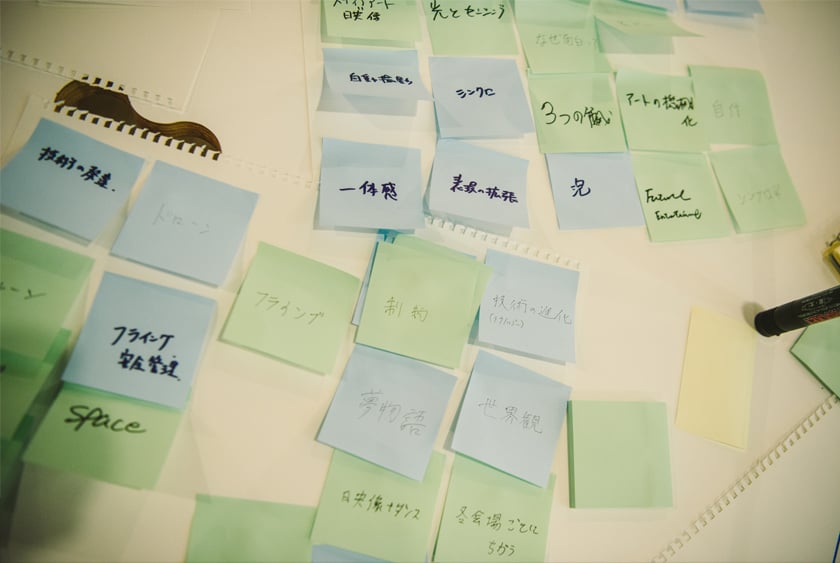 Technology is only a “mean” to expand experiences

At the Ideathon presentation, representative from each group presented the outline and the feature of the idea on stage. There were various ideas such as live production that unified audience's dress code into white and displayed projection mapping on them, and eye-ware that combined costume change and multi angle zooming. Overall, we had an impression that they were divided into two categories, either “one to make live more exciting” or “one with benefits when the live gets excited”.

Also, what became the key was, there were ideas that could destroy the existing businesses by extending a percentage of people's way to enjoy. For example, if there were eye-ware that allows audiences to see musicians close from any seat at the dome venue, there would be a possibility that ticket business that provides the large proportion of live business won't come into effect. If you balance it and don't see much merit as a result, it means that it's not enough as an idea that connects live experiences to the future. 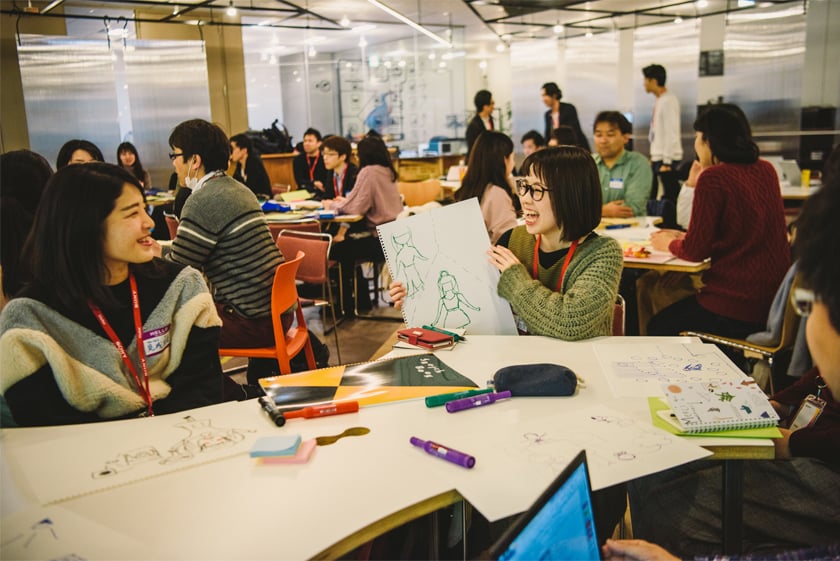 The best idea chosen by the students participated at the end was an application that allows users to choose to listen to their favorite idol's voice, heart rate and breath etc. at the idol's live, and to listen to instruments that they like or want to study at the band's live, by the operation of smartphones. In terms of expanding the way to enjoy at lives by sounds, it could be the idea that has a possibility to coexist with the ticket business mentioned earlier, depends on how to utilize it. One more factor that they were chosen as the best idea was their presentation skill. I would like to mention it as an effective way to pass ideas. 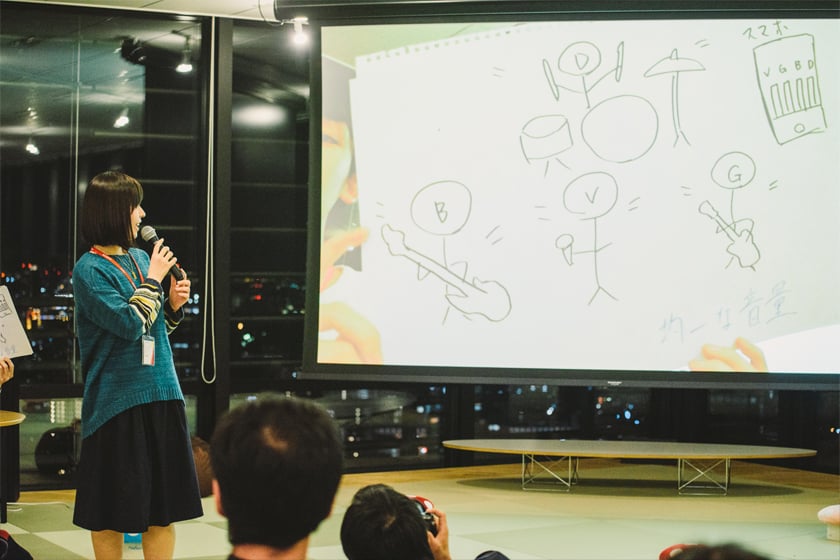 What I felt when seeing the result of Ideathon was that the input time before start was a big hint. Mr. Mizuochi from Sony and Mr. Iwashita from Avex respectively talked about the projects involved, but I think both of them was concealing the questions behind: former was “what is the significance of technology?”, and the latter was “what is the cause of entertainment?”.

In this time's Ideathon, with the theme of “Revolution in live experiences by technology”, participants tended to fall into ideas based on technology, such as “Is it interesting using VR?” or “It's new when we fly drone!”. Although technology is what extends experiences, it's important that it's only a mean. And I think that, beyond reflecting its core, there will be a good relationship between entertainment and technology.

After Ideathon was over, participants were enjoying the afterglow of ideas among students and with employees of Avex or Sony. What presented this time may be realized in a few years, and may create new live experiences. Ideathon was closed with pleasant stimuli that all the participants received. 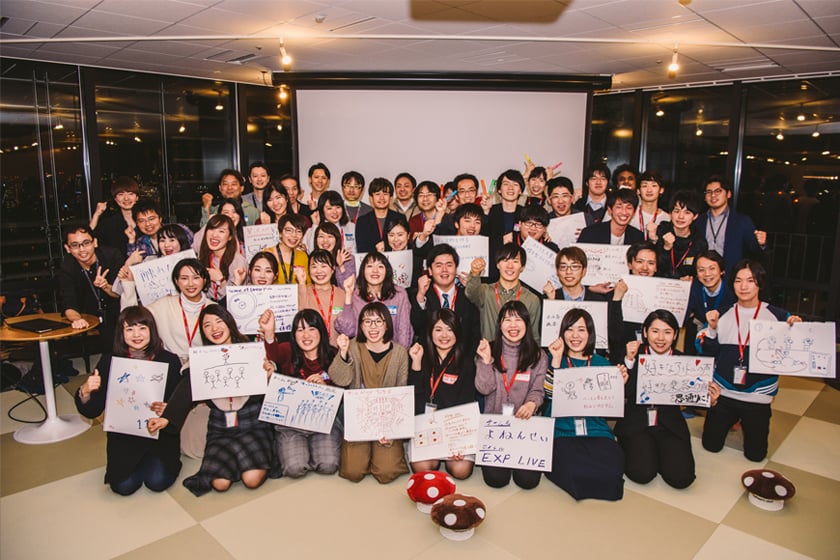